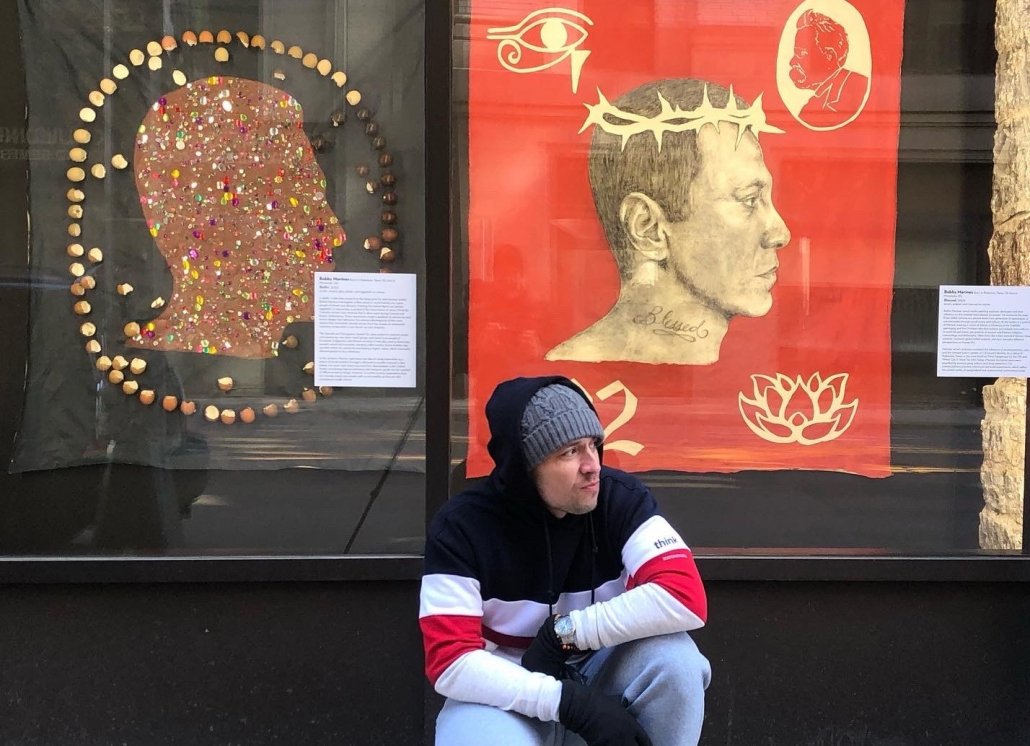 Bobby Marines in front of his artworks in Mestizaje: Intermix-Remix, on view at the M through June 12, 2022.

Bobby Marines is an energetic voice who uses his art and personal background to explore healing, identity, and vulnerability, especially for those whose experiences mirror his own.

From his childhood in Robstown, Texas, Bobby has launched his own arts career by committing to vulnerability, lifelong learning, and using his art as a conversation-starter. He’s now a trusted leader in his home community, having connected his purposeful art-making back to Robstown in various ways.

Communications Specialist Meredith Heneghan spoke with Bobby to discuss his story, the motivation behind his art practice, and what Mestizaje means to him.

MH: How did you realize that you wanted to be an artist? Where did that shift occur, and why did you turn toward art?

BM: That’s a really significant moment in my life. I’ve always been a creative person, and when I was younger, I would create to express myself. My mom would nurture that and support it, so I would go and wander outside and play and make weird contraptions. My uncle Tony would bring books about architecture and art and futuristic homes and stuff, and all these creative things would light me up. My dad would send artwork from prison, like sketches on handkerchiefs and all these cartoons on envelopes in ballpoint pen.

Then, when I dropped out of school in eighth grade and entered the streets, it was like that soft, creative side that my mother nurtured went away. My teen years were spent around ex-convicts and gang members, and there was no room for that soft, creative side. I shut that whole thing down, but I still had to create. I thought, how do I still use art?

MH: How did you end up in Minnesota?

BM: I visited Minnesota as a teen but ended up staying when my son was born. For years, I lived a domesticated life and held a factory job. I thought I was turning my life around, but I hated the factory with a passion. I remember being in the factory and I got written up for drawing. I would be in the assembly line sneaking off studying El Greco and Caravaggio.

After four years, I left the job and life I had known and I found myself in Texas. I had crashed and burned. I lost everything and I reached this point where I felt like I had nothing left to contribute. I thought this was where I should end my life.

MH: That’s an amazing story, and clearly the experiment of pursuing an art career has been successful and is the result of a ton of hard work. What was it like when you decided to commit to that?

BM: In Rochester, MN, I started with cardboard artwork that nobody wanted. I’d write my Tumblr on it, straight up, and drop it off at bus stops, nail it to trees, and leave it at the art center. I was like ok, I want to get my art into the world. How do I do that? What am I waiting for?

So I would get on the bus at seven in the morning, go plop downtown and just start painting in public. I started networking, and got to use empty spaces from friends that owned commercial real estate. I went to the St. Paul art crawl and got inspired by the event. By that time, I knew a few artists in town and I called them, and I was like, “Hey, is it cool if I bring people I know who make art and put it in that empty building that you have?” Literally anybody I know, let’s fill this building.

Those blew up into arts festivals. At my first one, we had seven stages and 60-something artists. After three festivals in Rochester, I took all of that to Texas and started the Dream Big Robé movement. Again, this was my giving myself opportunities, meeting new people, getting mentorship from people with MFAs and BFAs.

I would learn in public: I’d do live art for the symphony orchestra, I’d do spoken word, I’d come up with an exhibition with a theme and just create stuff for it. And since I didn’t go to school, I saw those as real life assignments. So I was learning and refining my philosophy and my conceptual ideas and my practice. 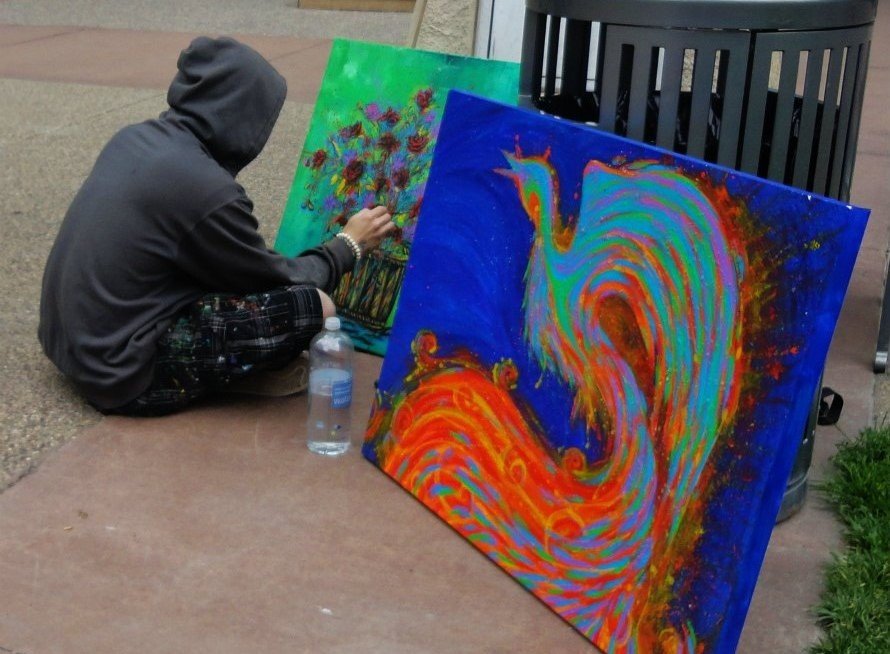 Bobby Marines painting on the sidewalk. 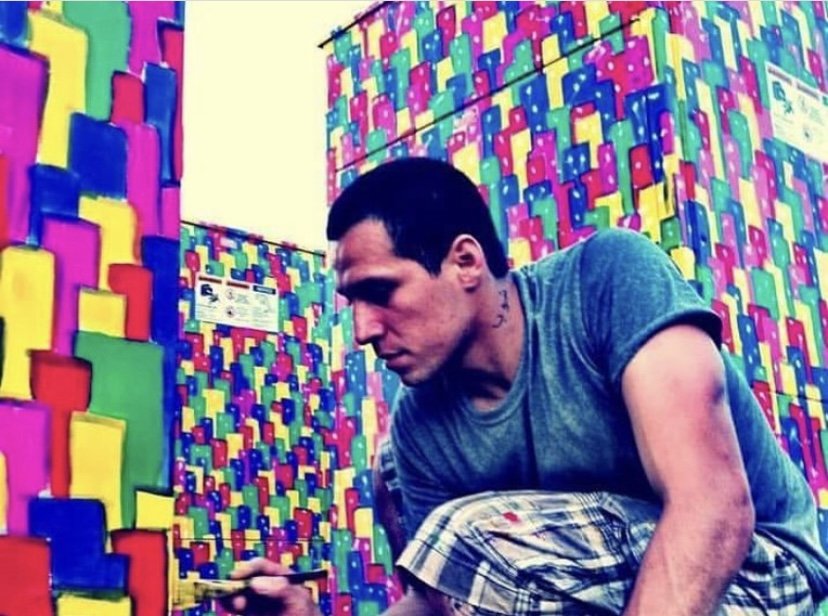 “So I was learning and refining my philosophy and my conceptual ideas and my practice.”

MH: Wow, those are unique ways of thinking about life and opportunity. It’s an awesome combination of confidence and humility, because you have to be able to be vulnerable in order to do this stuff, to try. But you also have to know who you are and be self-assured and confident! I think that’s a really graceful balance.

BM: I’m confident because I know I’m never going to stop. I’m confident in my ability to learn and adjust. I make it a point to make vulnerability cool, because we were taught that hyper masculinity doesn’t show any kind of emotion. Now, I wage war on that, through my art and within myself.

MH: That vulnerability comes up a lot in your live discussion series Voces y Visiones. Talk about that a little bit.

BM: So, I started that project originally because SooVAC (Soo Visual Arts Center) got a hold of me when the pandemic started. They were doing online virtual artist talks. I was down to do it, but by then people seemed kind of Zoomed out, and  I was wondering how to make mine different.

I thought instead of just showing paintings, how about I invite one of my homeboys from south central LA to come with me? I could show the work and then talk about the issue that I cover in that work. We touched on PTSD, abandonment, domestic violence. After it was done, there was a resounding desire for it to be a series.

I got a hold of my friend Miguel at the Alliance of Chicanos, Hispanics, and Latin Americans who also works for Mayo Clinic’s Center for Health Equity and Community Engagement Research. We linked up–I use art as the catapult, that’s my point of departure, and he invites an expert for that particular topic.

I made it live on Facebook so that my family in Texas could tune in and ask questions for live engagement.  It was this completely organic and original idea, and we ended up having Mayo doctors, a historian from Brown University, we were in the Humanities in Medicine Symposium, and now this year we’re actually sponsored by Mayo Clinic. That’s how it became what it is now!

MH: That’s really cool. Something we try to do at the M is make sure that people have access to talking about and experiencing art in a way that’s not overly exclusive. We want people to see art as something that’s for them, because art is universal! It’s cool that you figured out a way to talk about important things with art as the launching pad.

BM: That’s the thing, too, I would have my work up in a gallery and I would talk to some people that had never experienced what I had experienced in my life. They were interested, they’d ask questions and be engaged, but that was it. Boom, that’s it. What happens after this? Besides me just purging my pain right there on the spot, and then what? I want to put the art to work.

With Voces it was like, ok, no, we’re gonna talk with people, we’ll have the audience that can actually use my art to process the things I’ve had to process. And since I’m in that position where I’m trusted and entrusted by the community, they’re open to the conversation. 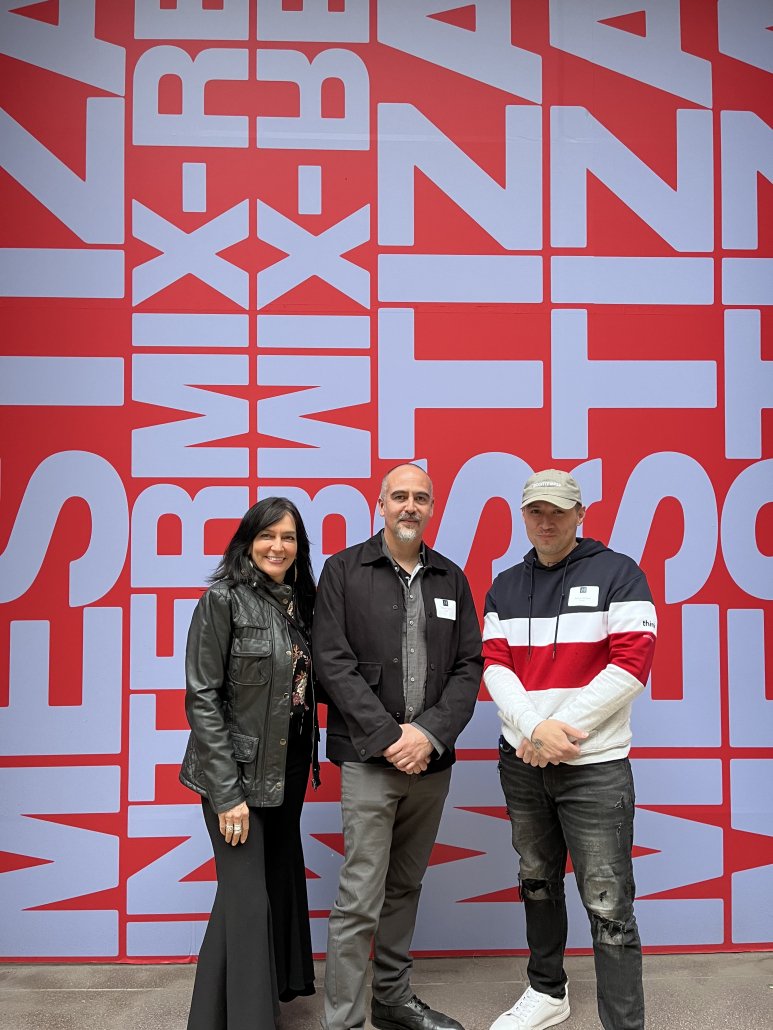 MH: You’re clearly a skilled and dedicated connector in your communities. How did you get connected with Grupo Soap del Corazón?

BM: When I first heard of Tina Tavera, I was watching TV. There was a show on PBS about Latinx artists in Minnesota, and I’m over here in Rochester where there was nobody like me and I was like, what?! I found Tina on Instagram and I messaged her to connect.

Years later, I end up getting a show at SooVAC, finally I’m up there on some arts-related stuff, so I messaged Tina again. She said she’d check the show out with Xavier, and from then on, that was it. They asked me to be part of the group, and by then, I had already done so much on my own I was just ready for everything.

Talking to them, I felt instantly at home. I felt understood. In Rochester, it felt like I was out of place, even when I had my work at the arts center, people in town were kind of disconnected. But meeting up with the Taveras, I felt instantly understood and accepted as far as my career and identity and my circle of artists. And it’s pushed me to see new possibilities. I’m like, oh, I can think even larger!

MH: So, for this show, Mestizaje, is that a concept that you’d thought about or reflected on previously? Or is that something that this project invited you to think about?

BM: It’s funny because I grew up with 98% Latin Americans, and a small percentage African Americans, and then I think there was one white dude in my school. I’ll never forget, his name was John Smith and he knew karate.

MH: Of all names!

BM: Of all names. I’ll never forget it. So, I never had to question my identity because we were never up against anyone else to compare ourselves. When I came up here, I immediately saw a contrast. I saw people from all over the world, and everybody’s holding onto their cultures up here because they’re so far away from home. And they ask these questions that I’d never asked.

The thing is that Mestizaje was very very laser focused. Mestizaje. That one word. This was the first time I was able to really focus and come in for a particular lens. That really helped me.

“The thing is that Mestizaje was very, very laser focused. Mestizaje. That one word.”

MH: One of your pieces in Mestizaje, Ballin’, is this interesting multimedia artwork that involves eggshells. Can you talk about the value you see in your multimedia approach?

BM: When it comes to the eggshells, the eggshells are cultural to us. Cascarones–we save eggshells and on Easter we fill them with confetti and crack them on each other’s heads. So not only is it a cultural thing,  but it’s referencing an origin. Birth. An egg is the birth of something. You see they’re painted in those different shades, the sixteen shades that represent the casta system. They’re fragile, like this system is fragile. You just have to look at it directly and you see that it’s nothing but a facade. So, same thing with all the gems on there, the fake gems that look really gimmicky, that’s what it is! It’s a facade. When you’re looking at Ballin’, you’re looking at the facade of value systems imposed by the outside.

To hear more from Bobby, take a look at the trailer for Season 1 of Voces y Visiones! And check out his artwork in Mestizaje: Intermix Remix at the M through June 12, 2022.