Image description: A large banner spells out “FIBER” and hangs in the entryway of Interact’s fiber studio, which has various artworks hanging on the walls and adorning mannequins in the corner.

On a sunny summer Tuesday, Interact Center for the Visual and Performing Arts was abuzz with artists painting, creating, drawing, discussing, rehearsing, and sculpting. Among them were some artists whose work is featured in In Our Minds, on view in the M’s exterior windows and skyway gallery through October 16, 2022. Communications Specialist Meredith Heneghan spoke with two of them, Kramer Hegenbarth and HML, about their art, their inspiration, and how Interact changed the course of their lives. 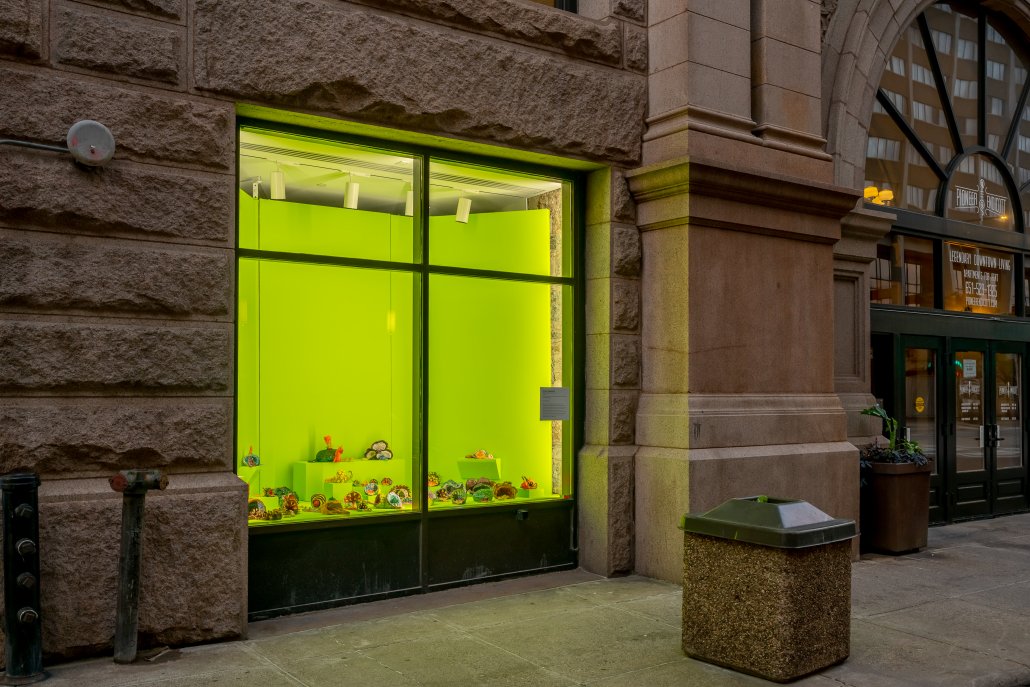 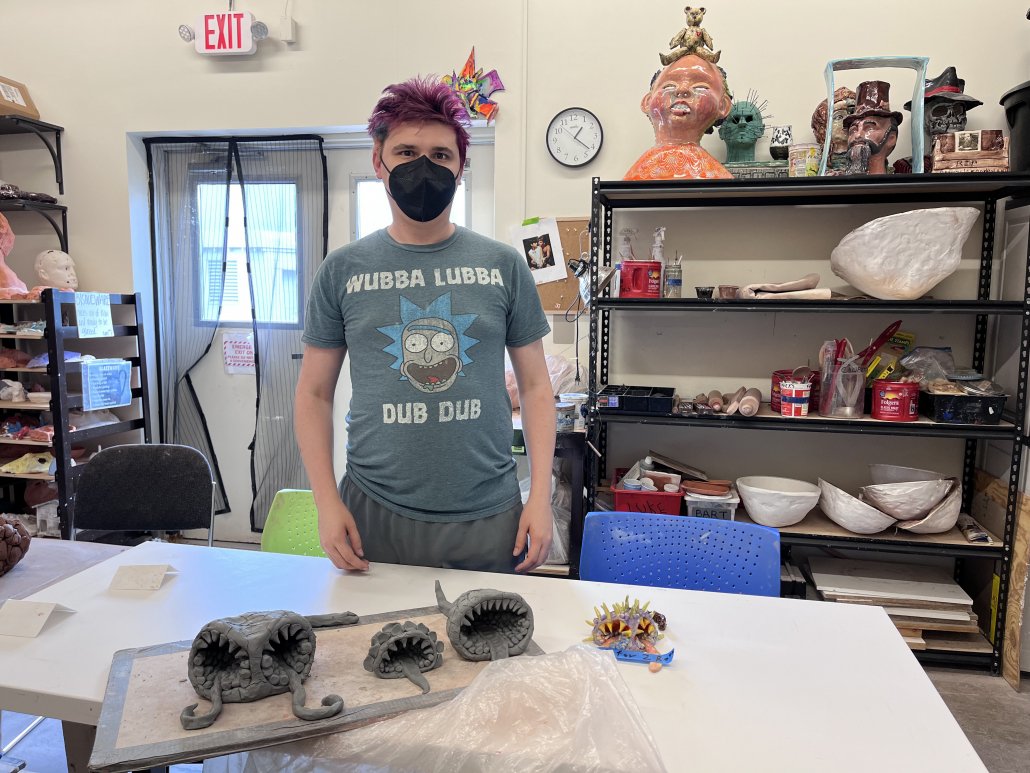 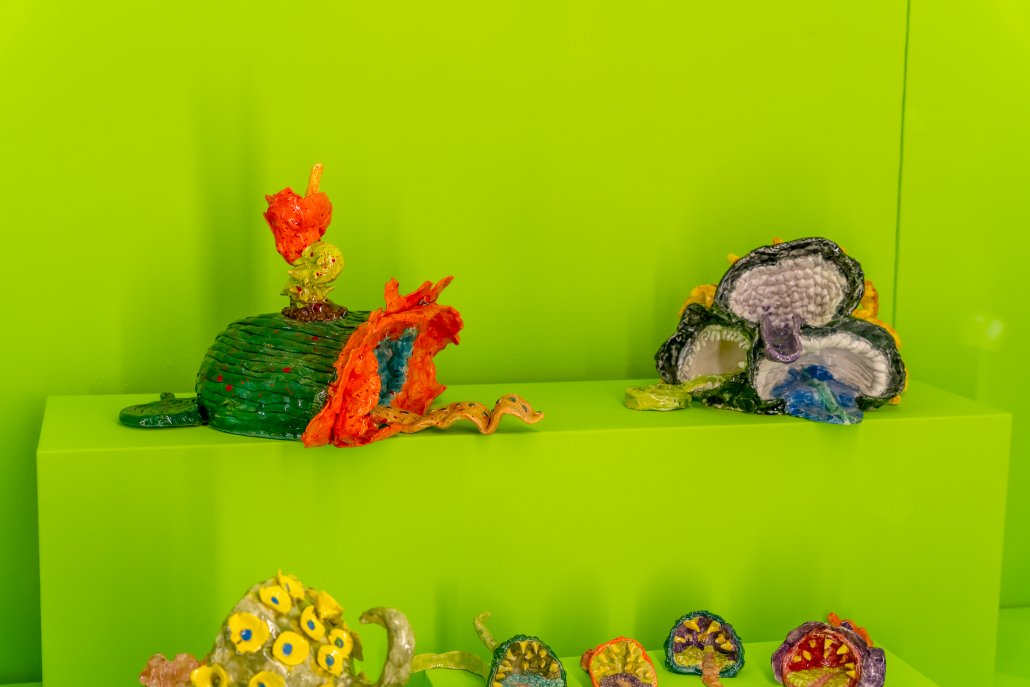 Image descriptions: (left) Kramer Hegenbarth’s Rock Creatures on view in the M’s Robert Street windows at dusk, lit up and displayed on a bright green display background, (middle) Kramer Hegenbarth stands in the Interact ceramics studio in grey sweats and a graphic T-shirt with three in-progress and one finished sculpture on the table in front of him, (right) a closeup of a green and orange Rock Creature with a wiggly pale tongue sitting on a bright green display box.

Kramer Hegenbarth’s Rock Creatures are a colorful, playful, and detailed series of ceramic mouths that take on fantastical and unique qualities. Hegenbarth has made dozens of these creatures and there’s no end in sight for this intriguing, prolific artist.

MH: What do you want people to know about you?

MH: Where does that creativity come from?
KH: Just born with it.

MH: Can you describe the process of making a piece of art like that?
KH: Just grabbing a chunk of clay and making a ball. Putting my thumbs in it and then pulling it to open up the mouth, and then making little rocks, beads in the tongue, and just deciding what stuff to add on it.

MH: How do you decide what each one will look like?
KH: It decides itself, pretty much.

“It decides itself, pretty much.”

MH: The Rock Creatures series that we have in the show is a collection of your sculptures that are all different but seem related to each other in some essential ways. Can you talk about that series and where it came from?
KH: Kind of nature, rocks, and Little Shop of Horrors. These guys are based out of that.

MH: What’s next for you? What are you going to make next?
KH: More of them.

MH: When you’re creating fantastical beings, what does it feel like for you? Or are you entering into another world?
KH: Just fun.

MH: How many have you made in total so far?
KH: I’ve made 50 or so, I don’t know exactly because some sold.

MH: How has Interact influenced what you do and your art practice?
KH: It really opened up a lot of things. I used to just do regular jobs and stuff, and not do as much artwork, but now I do a lot of art. 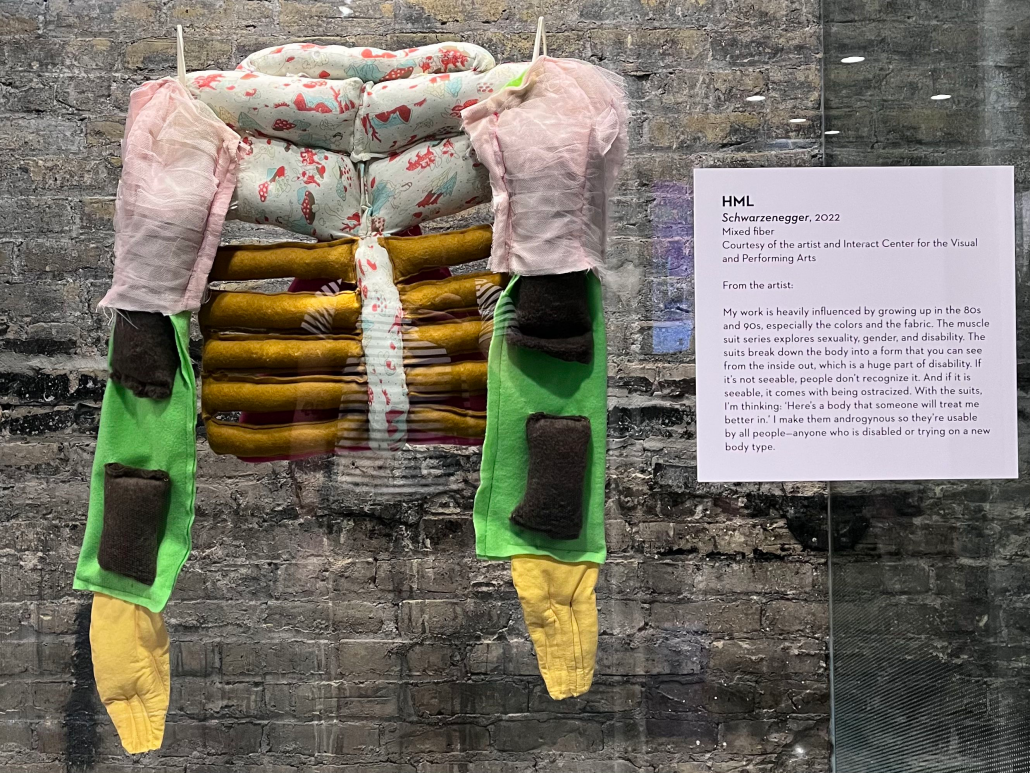 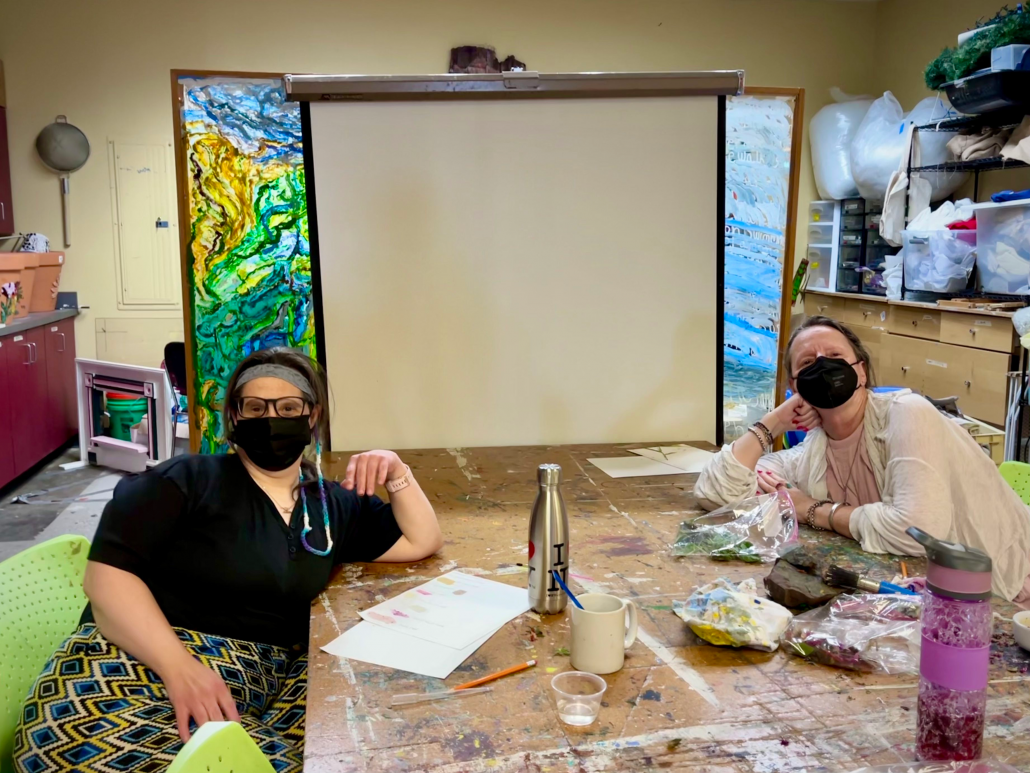 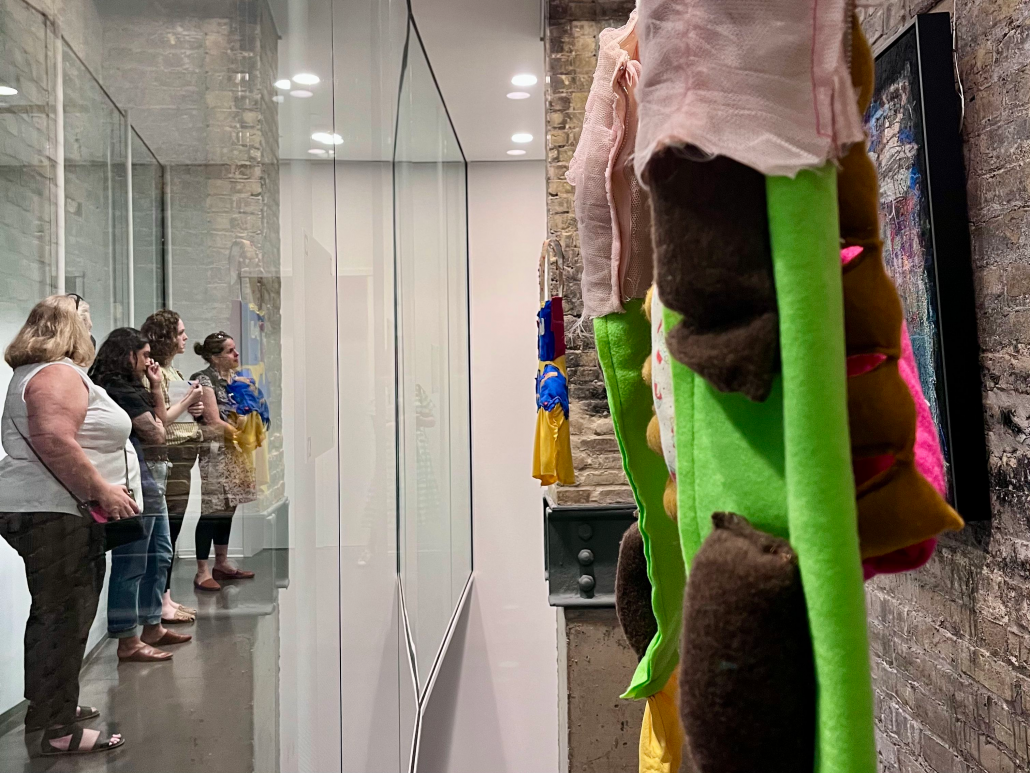 Image descriptions: (left) HML’s Schwarzenegger, a yellow, green, pink, gold, and white fabric stuffed skeleton-like torso hangs behind glass against a grey brick wall in the M’s skyway entrance, (middle) HML and Briana Shelstad sit across from each other at a table at Interact, (right) a side view of the green fleece sleeve of Schwarzenegger is in the forefront, and behind the glass stand people viewing the artwork that’s hanging on the brick wall.

HML is a fiber artist whose visionary process results in works that are both familiar and new—weavings and stuffed animals invite new meaning and depth as HML creates everything with a sense of originality and intuition.

MH: What do you want people to know about you?

HML: That’s a tough one. I’m trying to use art as a coping mechanism for dealing with larger issues in my life, and it works very well for me.

And I want to be taken seriously as an artist if at all possible, not that I worry about that so much, because I was so surprised by that to begin with when I came to Interact. When I started, I had no idea if it would work out. With major depression, which I have, you have issues with attendance, with getting things done, you know, procrastination, and all those kinds of things. I wasn’t sure if I would be able to do any of that. Will my creativity come through? And then I started and it worked out so beautifully.

I mostly do fabric and textiles because I went to school for apparel arts when I was younger. Then I got into weaving, which I had never done before. So I kind of got into the whole boho weaving hippie kind of thing, you know, and then I did a bunch of that and ended up trying to make it more my style. Some of my work is more like punk weaving, in a way. Radical colors and put together with interesting fabrics and stuff like that. I have one here that’s my favorite one, really sums up what I’m trying to put across with my artwork. What’s most important to me is that people enjoy it. I’m not in this to make money, I’m in it, like I said, as an enjoyable process and a thing that I do, as well as a really great coping mechanism for all my mental health issues.

“Would my creativity come through? And then I started and it worked out so beautifully.”

MH: You described some of the work that you’ve done. Is there a way to describe in general your art practice?

HML: I come up with ideas. For example, right now I have two or three different projects that I’ve set back because I have one project that I’m supposed to be working on. The whole issue is that I try very hard to finish the project I’m working on, and then sometimes I have to take breaks from what I’m doing. So it’s good for me to have something else to do, because once I get really bored I have to just do something else for a while.

Right now, I’m working on this stuffed skeleton, and it’s a project that I’m hoping to get done by September. I started off by working on this with Nora, a teacher here, and we’re collaborating on the project. We drew a picture of what we wanted to make, so it’s basically a skeleton that’s people-sized. And it’s all stuffed felt. So it’s like a big stuffed animal, in a way. It’s turning out pretty interesting to begin with—it’s a lot of detail, a lot more than I thought it was going to be. Just because there’s a point at which you gotta go, ok, there’s only so much perfectionism I can handle. And I’m not a perfectionist! I’m just going to do this the way I do it. I’m a good sewer, but I’m a sewer who just goes “shoop shoop shoop!”

HML: And I don’t make patterns, I just cut them out. In my head, I go, this is what I’m cutting. I go, ok, here’s a picture of a skeleton. I want to create this ribcage here, how would I make this out of fabric, stuff it, and make it look like a ribcage? And then I cut it out, sew it together, and try to make it look the way I want it to look. And figure out how I’m going to attach all those things together. Generally, it works out, it’s like a big puzzle in that way. As it goes along, it works out the way I want it to.

MH: The muscle suit that’s in the show is made of soft materials but the title suggests that it provides strength and is almost an armor. What does that mean to you?

HML: Well, we were going to do a LGBTQ-inspired show right before Covid hit, and one of the things that I came up with is that we’d have passages. From precontemplation to contemplation to commitment. To represent whatever it is I’m trying to figure out in my life, kind of like the transtheoretical stages of change. So I was thinking that this would be an interesting way to bring that across on stage. Maybe we could have bodies that people could try on. I was creating pieces that people could try on and say, ok, I like this, or I don’t like this. And so I got three body suit pieces from it, two for the show and one that I made specifically afterwards because I got such a good reception on it.

“I was creating pieces that people could try on and say, ok, I like this, or I don’t like this.”

MH: That’s cool, so it’s less about it being an armor but more of an option.

MH: You said the skeleton is stuffed felt—are there certain elements you’re looking for each time you start something new? What do you look for in the materials that you use for your pieces?

HML: Well, it’s tough because when you’re working with a certain medium you’re really constrained by the medium itself. And the only thing you can do to make soft stuff harder is by stuffing it. Sewing it into a certain shape and then jamming stuff inside of it. So, that’s really where a lot of my constraints come from. When I make a shape and fill it with this much stuffing, what’s it going to look like? You know, also, in this piece I’m working on now, I need joints. So I’m actually going to use pom pom balls as the joints and try that out.

MH: That’s such a cool idea. You have a very visionary attitude toward art-making. Asking, “What will it look like if I do this?” Instead of planning meticulously for a specific outcome.

HML: Yeah, it’s kind of flying by the seat of my pants.

MH: But it ends up being just as valid! Is there anything else that you want to share about you or your art or being here at Interact?

HML: I can’t say enough good things about Interact, or really explain how much of a wonderful program this is for everybody who comes here. It’s changed my life. I spent a large part of my life as a nurse for 12 years, and ended up losing my nursing license due to substance use issues and major depression issues. And when I was young, I said I would either be an artist or a nurse, and I chose to be a nurse. And then, I lost all of that, and this is allowing me to redo my life. Allowing me to do something that I wanted to do in my past. It gives me the opportunity to have both things in my life, which is really just, I couldn’t ask for more of a blessing.

MH: That’s amazing. That’s such a beautiful, hopeful story, and thank you for sharing.