Chroma Zone muralist Fadlabi will discuss his artistic practice as well as the content of his mural, The Air at Night, which includes themes relating to his upbringing in Sudan and the ongoing Sudanese revolution. This talk will be held on Monday September 9 at 7 pm at Forecast Public Art. Chroma Zone will partner with Mizna and the Minnesota Museum of American Art (The M) in bringing Fadlabi. This project and lecture is a public component to Mizna’s 20th anniversary retrospective exhibition, History Is Not Here: Art and the Arab Imaginary, opening September 12, 2019 at the M.

Fadlabi (b. 1975 in Omdurman) lives and works in Oslo. He was educated at the Art Academy in Oslo (KHiO), Al-Neelain University in Khartoum, and Sudan University. He works with painting, text, and performance. In 2008 he founded “One Night Only” an artist-run platform in Oslo that shows a new artist every Monday. Possibly, Norway’s most busy gallery. Between 2010- 2014 he worked with artist Lars Cuzner on European Attraction Limited, a contemporary rendition of a human zoo named The Congo Village and was part of the 1914 World Fair in Oslo. They re-enacted the village and opened it to the public in May 2014. His recent shows includes Sharjah Biennial 11 (Sharjah), Bergen Assembly (Bergen)The Museum of Contemporary Art (Oslo), Kunsthall (Oslo), UKS (Oslo), Munchmuseet i bevegelse (Oslo), NY Art-book fair (NY), Performa 15 NY (NY), Temporary Gallery (Cologne), Nile Sunset Annex (Cairo), Al Riwaq (Manamah), the Saudi Arts Council (Jeddah), Darat Al Funun (Amman) and Townhouse (Cairo).

Chroma Zone is partnering with Mizna and the Minnesota Museum of American Art (the M) to bring Fadlabi. The mural he’s creating for Chroma Zone is one of the public components to Mizna’s 20th anniversary restrospective exhibition, History Is Not Here: Art and the Arab Imaginary, opening September 12 at the M. 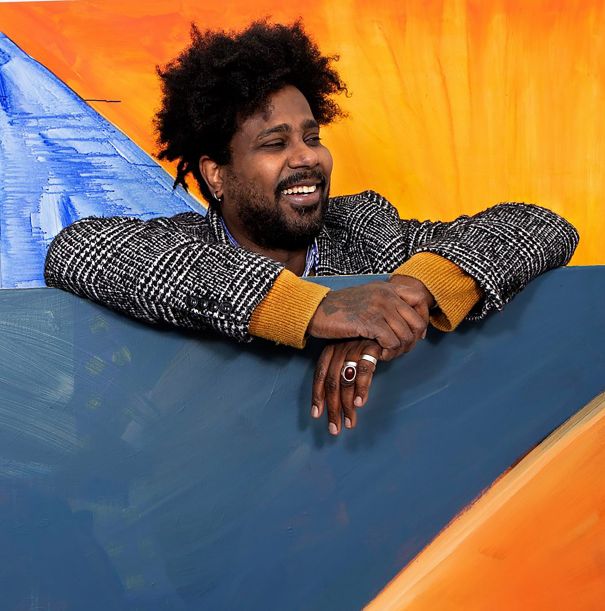