I am the M

All different types of people make up the M. Who are we? What do we represent? Who supports the M? I am the M answers those questions.

Each feature is debuted in the M’s seasonal newsletter. 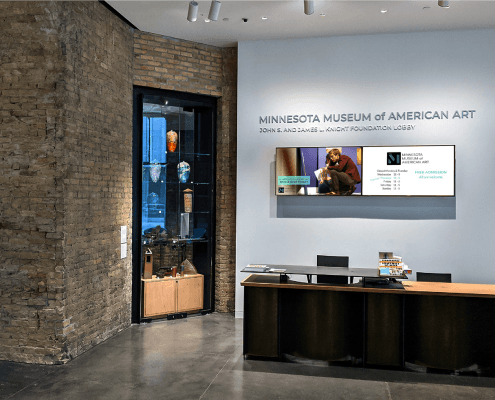 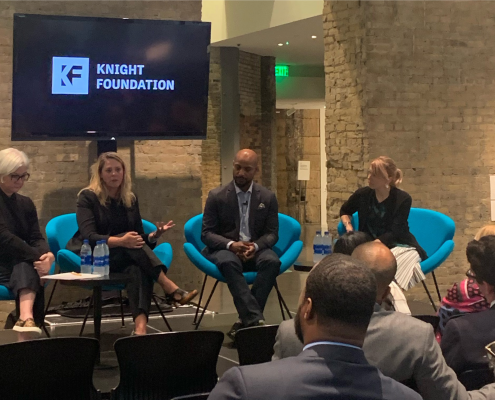 Knight Foundation, a national funder with strong local roots, has dedicated this new contribution to the museum as part of its community initiatives grant-making program, which focuses on enhancing civic engagement, opportunity, and vitality in key cities across the country, including St. Paul, where brothers John S. and James L. Knight operated newspapers.

In addition to this newly announced gift to the M’s capital campaign, Knight Foundation was a key funder for the museum’s 2017 St. Paul Murals Project. The fall 2019 exhibition, produced in partnership with the St. Paul-based Arab arts organization Mizna, History Is Not Here: Art and the Arab Imaginary, was also made possible, in part, by Knight Foundation (along with support from the Andy Warhol Foundation for the Visual Arts, St. Paul Cultural STAR, and Marbrook Foundation).

We’re so grateful for this vital, timely show of support for the M from Knight Foundation. We couldn’t be more proud to have the museum’s lobby bear the name of a funder which is doing so much to invest in the vibrancy of our capital city and its communities.

Alex Johnson (age 11), a sixth grader at Cambridge Middle School, visited the M with his dad, stepmom, and sister Abby during the museum’s opening weekend this past December. They explored the galleries and dug into the creative activities in the Ford Center for Creativity. He says he especially liked Judy Onofrio’s colorful Deep Water sculpture (“the one with all those bottlecaps and faces!”) and the fabulous Louise Nevelson wood assemblage in the Alley Gallery. He was impressed by Sheila Pepe’s monumental web of rope, tow lines, and crochet in the Rauenhorst Court, too. But once he got into the gallery, Alex says it was no contest: George Morrison’s 1979 Landscape (pictured above) stole the show.

In fact, Alex liked Morrison’s intricate wood-work so much, he was inspired to go home and make a collage of his own. He got his dad to cut the wood pieces for him, and then Alex affixed them to a frame with wood glue and staples, adding a flourish of found objects from what he found in the grown-ups’ workspace. (We hear he’s made similar sculptural pieces for his mom and grandmother before, which they both proudly display in their homes.)

It made our day when his family reached out on social media to share his creation with us! Alex says he’s looking forward to a summer filled with baseball and basketball, camping, and playing outside with his friends. Their family also loves to explore the Twin Cities’ arts and culture offerings, but their visit in December was the family’s time at the M (and his sister’s first trip to an art museum to boot!). We’re happy to report they say it won’t be their last. Alex says they’re looking forward to coming back again soon.

We’re so proud to have a creative space for budding artists like Alex, and we can’t wait to see what he’s inspired to create after his next visit! 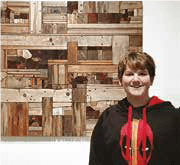 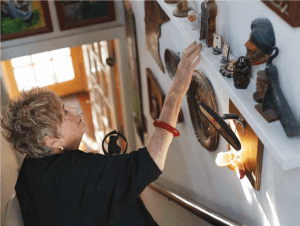 During a recent visit, artist Judy Onofrio asks me to open a closet just off the breezeway of her home in Rochester, Minnesota. Inside are six floor-to-ceiling shelves, bursting with pottery she has neatly stacked and arranged just so. There are dozens of pieces by some of her favorite artists. “Reach down and grab that white piece down there,” she says. “That’s one of my favorite pieces by Mac [Warren MacKenzie].” As I carefully place it on the table, I see there are other plates by MacKenzie in the same stack, next to shelves filled with work by other important artists, like Kurt Hoard and Connie Mayeron-Cowles.

We talk for hours, about the M’s new facility and future, our current exhibition 100 Years & Counting and the upcoming craft exhibition, The Good Making of Good Things. We also chat about plans for her new site-responsive installation in the M’s Rauenhorst Court, planned for 2020. “The M is exciting to me,” she enthuses, “especially its collection. I know it has an important history and I want to see more!” But today, I’m not here about the M’s collection; I’ve asked to see hers.

It only takes a second for her to touch a bowl or plate to be reminded of the story attached to each piece. She caught the collecting bug early, and she caught it hard. If you know her work, you know how many bits of glass and metal beads go into her beautiful, riotous sculptures. She collects artwork with the same intensity. Over the years, she has amassed a massive personal collection, with a focus on craft and sculpture made by both regional and national artists, most of whom she counts as friends.

Those personal connections to the artworks make sense; Onofrio has been an important part of the Minnesota arts community since she moved to Rochester in 1967. She has had dozens of exhibitions in that time, but she’s a hand in developing the arts community, too. She served for a time as director of the Rochester Art Center, helped establish Minneapolis Institute of Art’s beloved Minnesota Artist Exhibition Program, and founded the Minnesota Craft Council. Early in her career, she showed at college galleries and museums all over the state. That exposure helped her develop her creative network and put her in touch with the very artists whose work would become part of her growing collection, including her lifelong friend Warren MacKenzie, Jun Kaneko, and Mark Ferris.

She reaches over to grab a few more of her favorite pieces by Sun Koo Yuh, Peter Pincus, and Michael Corney. Onofrio and her husband Burton are surrounded by these objects every day; she still uses many of them. She explains: “It’s not about value, for me. Some of these pieces are quirky, and some are just funny. I don’t keep anything that becomes wallpaper. I keep them, because I get power from them.” And that power is palpable in her own practice. The same sense of obsessive accumulation in the bottle cap sculpture she has by Clarence and Grace Woolsey is echoed in her own largest works, such as Deep Water and Jungle Dance [two pieces in the M’s collection].

Over the years, she’s traded more pieces than she can count, but she has purchased many works, too. She says, “For me, the [craft] community has always been so supportive. We’ve shared ideas and supported each other’s work.” Collecting, for her, is personal. It’s her way of actively supporting artists, so they can continue to make beautiful work.

In addition to studio art classes, community convenings, and drop-in art-making, the M’s new Josephine Adele Ford Center for Creativity will be home to rotating Artist Takeovers, empowering artists of all disciplines to shape the M’s learning spaces as makers, teachers, and creative catalysts. Through December, Rebekah Crisanta de Ybarra, a local artist and co-founder of Electric Machete Studios, will lead the M’s first Artist Takeover and be involved in both class instruction and her own art-making on-site, working in Latinx and Indigenous art forms.

“I really appreciate what a wonderful job the M does in staying rooted in the community,” Crisanta de Ybarra says. “People will be able to come down to the Center for Creativity and make something over their lunch hour, or after they finish their work day. Folks can just drop by to have some time for meditation, or to explore different art forms. It’s wonderful to have such open access to all these beautiful collections of work and to artists in practice.”

When asked about what this residency means for her own artistic process, she says: “I love the idea of being in a kind of glass house. I’m eager to invite the community to come into my studio at the M. But I’m also really looking forward to having this month-long period of intensive studio time, where I can really dive deeply into my work.”

She describes the Artist Takeover as a rare opportunity to focus on her process rather than end results, and to do so in community with other makers. “I’m eager to bring in other artists from my community—musicians, visual artists—during the residency,” she says. “I’m also looking forward to our classes in folk art forms not usually recognized as being American art traditions: workshops about making pre-Columbian ceramic flutes, and classes in papel picado (Mexican paper-cutting).”

“The American story is a story, first, of indigenous people,” Crisanta de Ybarra says, “the original people of this land. I can trace so much of what I do to what has been done by historical artists in my ancestral community, even though I may be working in contemporary ways.”

We’re excited to share a variety of ways for visitors to engage with notable artists, like Crisanta de Ybarra, and to learn more about their practice and creative process. The M’s Artist Takeover program offers a unique opportunity both to support Minnesota artists and to bring new avenues for hands-on learning, conversation, and creative experiences into the M. 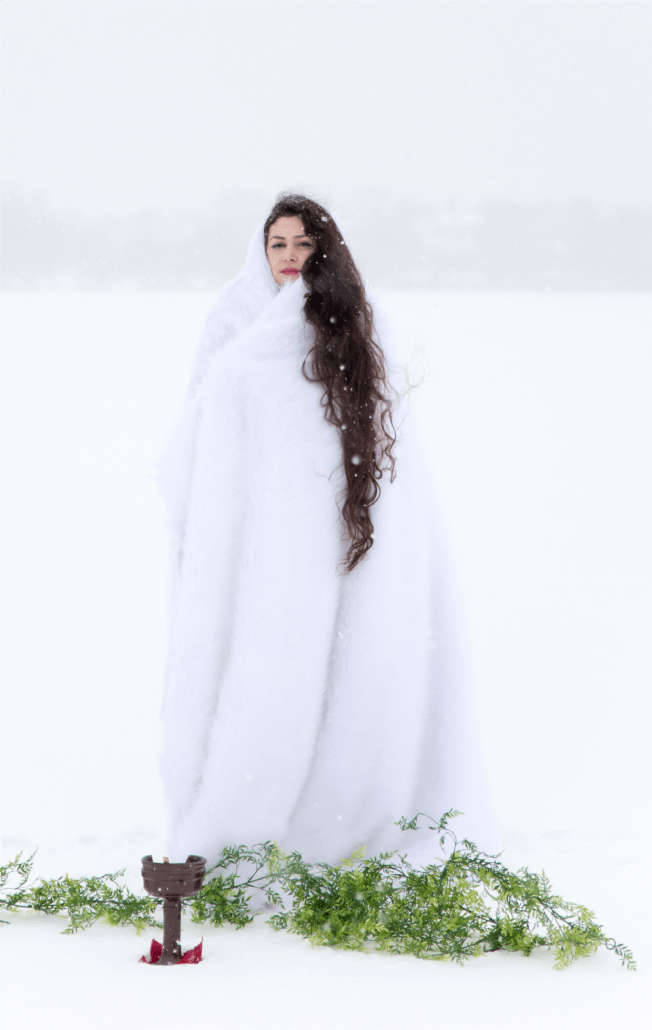