By Christopher Atkins, Curator of Exhibitions

You can’t talk about the history of the American craft movement, particularly ceramics, without taking note of the life and work of Warren MacKenzie. He was a well-respected, practically sanctified presence amongst craftspeople all over the world, well-known for his lifelong commitment to truth of form, integrity of materials, and the unfussed utility of his pots, bowls, and plates. On Monday, December 31, 2018, Warren MacKenzie passed away peacefully at his home in Stillwater, Minnesota, at the age of 94.

MacKenzie had a long history with Minnesota Museum of American Art (“the M,” for short), as a teacher and an artist. He and his first wife, Alix, both studied at the School of the Art Institute of Chicago (SAIC). They moved to St. Paul in 1947 and began teaching at the Saint Paul Gallery and School of Art (as the M was then known) in 1948. The MacKenzies’ influence, among the region’s makers and at the institution, was palpable almost immediately.

Warren and Alix were instrumental in developing the hugely important Fiber/Clay/Metal exhibitions, mounted by the Saint Paul Gallery and School of Art between 1952 and 1964. It is from these nationally-recognized exhibitions that many excellent examples of studio craft entered the M’s collection. For example, Warren and Alix’s Vase, currently on view in our exhibition 100 Years and Counting, was acquired from the Fiber/Clay/Metal biennial of 1959. His impact on the School and Gallery didn’t end there: he taught ceramics at the institution’s Grigg’s House location on Summit Avenue from 1948 – 1950. During that time, he also successfully lobbied then-director Malcolm Lein to present an exhibition of new paintings by MacKenzie’s SAIC classmate, the now-legendary Abstract Expressionist painter Joan Mitchell. Warren and Alix also organized a series of pottery workshops and a massive exhibition of work by a young and influential Japanese potter, Sohji Hamada, in 1952. 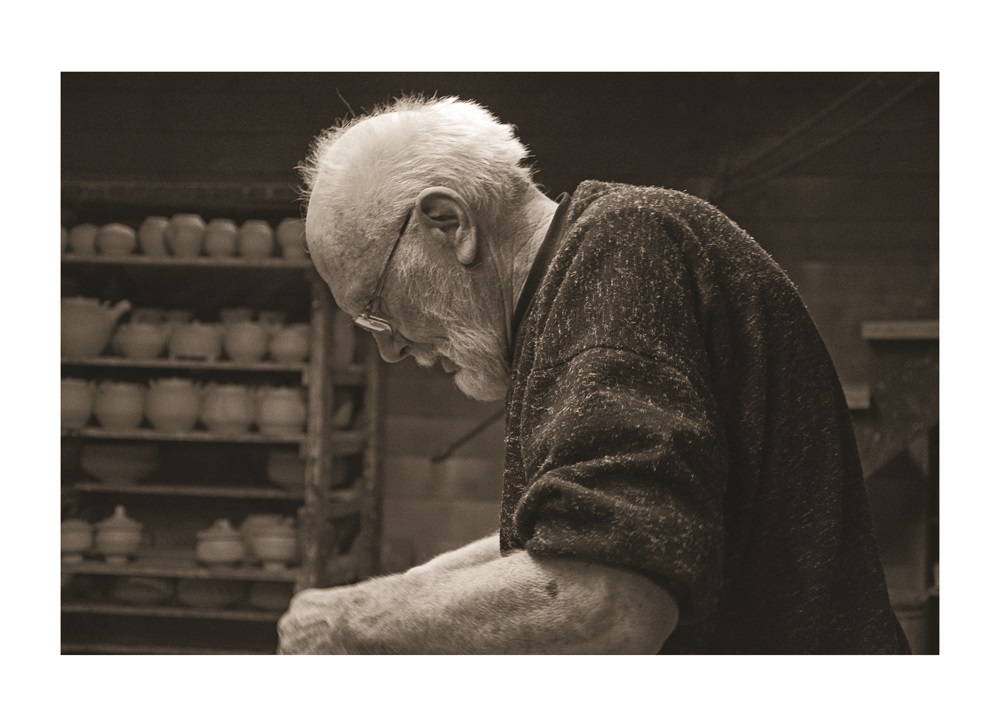 Photos by Bouky Labhard, from the portfolio “Warren MacKenzie: Twenty-Six Views,” 2011. Purchase, Acquisition Fund and with funds given by an anonymous donor.

And these are just a few of the many landmark exhibitions, artworks, and experiences MacKenzie brought to the M and its audiences through the years. Alix passed away in 1952 but MacKenzie continued to be an inspiration for young artists during his long career in the art department at the University of Minnesota from 1953 – 1990.

MacKenzie had a strong work ethic, throwing pots each day in his studio in Stillwater, Minnesota well into his nineties. He was generous with both his knowledge of the field and his friendship, leveraging his reputation to generate national attention for the burgeoning community of potters living and working in the St. Croix River Valley. The enormous appeal of MacKenzie’s work lies in its eloquent simplicity. His bowls, cups, and plates are distinguished by their clarity of form, purpose, and surface decoration. His work is beautifully honest. His are pieces that want to be held, touched, and used for years and years to come. And this connection between hand and clay is the most important feature of all. Not only can you see how Warren’s pieces were made, your fingers are drawn to touch – to follow the mark of the artist’s hand over the surface of his bowls and vases.

In addition to the M, Warren MacKenzie’s work has been collected by important local museums including Minneapolis Institute of Art and the Weisman Art Museum, as well as national and international art museums such as the Art Institute of Chicago, Metropolitan Museum of Art, the Smithsonian American Art Museum,  the Victoria and Albert Museum, and Japan Folk Crafts Museum, Tokyo.

You can experience a number of MacKenzie’s gorgeous ceramic works in person this spring at the M. They’re on view as part of the exhibition The Good Making of Good Things, through June 2.