Comfortable with Chaos: A Conversation with Brad Kahlhamer

Look at Brad Kahlhamer’s paintings, and you’ll find skulls, totem poles, song lyrics, calligraphic lines and geometric designs, cartoons, and company logos. In his sculpture, you’ll see hair, fishing lures, wire, and eagle feathers, all fashioned into dreamcatchers and katsina-inspired dolls.  He is a Native American adoptee with a German-American, Wisconsin upbringing, steeped in hunting, fishing, and “yondering” outdoors. He’s still close to his family. Kahlhamer moved to the East Coast to realize his art career; he has been, for years now, a proud New Yorker. Variously influenced by underground comics, street art, punk rock, nature, Native American iconography, and abstract expressionism, Kahlhamer’s work is part fantasy, part autobiography. In a way, it’s an exploration of an unreconciled personal history. It’s no surprise he is drawn to the creative tensions between authenticity and ambiguity.

In 1972, many years before his career in New York as a visual artist, Kahlhamer (then age 16) was learning to play guitar in the basement of his Wisconsin home. “I was captured by the sound,” Kahlhamer recalls during a visit at the M in April. “My first guitar was from Sears Roebuck and practically unplayable. I was in a variety of three-six piece basement bands for a number of years. We’d play lakeside resorts, dive bars, small clubs throughout the Upper Peninsula.” He embraced the freedom of life as a road musician for ten years. But by the time he finished his BFA from University of Wisconsin-Fond du Lac and Oshkosh in 1982, he was ready for a new scene. “I remember, one day I woke up next to the drummer of my band on some beat-up couch in some club in the U.P.— we were both sick from a night of hard partying — and I just said: I’m done with this.”

Attracted to the galleries of the East Coast, Kahlhamer set out for Boston. “Boston’s dot on the map seemed about the same size as Milwaukee’s dot on the map. I knew Milwaukee, so I figured I could probably handle a city like Boston,” he recalls. However, as would have it, his car broke down 170 miles from Boston in Danbury, CT. “I ran into a family friend who suggested I belonged in New York instead. When I hit the road, I followed his advice.”

Kahlhamer’s work is part fantasy, part autobiography. In a way, it’s an exploration of an unreconciled personal history.

It was advice was well taken. When Kahlhamer arrived in New York he was immediately taken with the scene. “It was still small enough to feel a part of —  a perfect intersection of art, fashion, and music.” With $750 in his pocket, he took a job at Topps Chewing Gum in the pay-stub department. There, he met Art Spiegelman, who requested he be reassigned to New Product Development. “Through Artie, I met a lot of guys from the underground comics scene — the jagged lines, the improvised nature of the work — it really appealed to me.”

He stayed at Topps for ten years, working his way up to Design Director. On the side, he worked on his visual art practice and played in band he describes as “Patti Page meets dubstep.” He concedes that, at times, New York could feel lonely to a transplanted Midwesterner. “Most people I knew from the Midwest went West. But I headed East instead, to a gritty, sunless world,” he laughs. “It took a while to get up to New York speed: it’s like I was riding a bicycle and everyone else was in sports cars.” But coming from a decade on the road, he says, “I felt really comfortable in the chaos. I loved it. My lexicon had to grow; I had to learn to keep up.”

Eventually able to wean himself off the steady paycheck from his day-job, Kahlhamer became a full-time artist and musician in 1992. Just a week after quitting his job at Topps, he caught his first big break. “I got invited to be part of a group exhibition in Amsterdam at Galerie W139. It seemed like a sign – like, here was this amazing opportunity. I thought, ‘wow, this could really turn into something big, something international.” He’s quick to qualify that, though, saying the art world isn’t about luck. “It’s a lot of hard work – dedication and commitment. It’s putting yourself in a place like New York. It’s a risky operation, but do that, and you’ll find like-minded people.”

For Kahlhamer, the Lower East Side of the ’80s and ’90s was the place to be. “You might run into anyone – actors, musicians, artists, designers. It was easy to meet people doing all kinds of amazing work,” Kahlhamer recalls. “It was a place that not only accepted, but welcomed difference.”

“It makes sense, to me, to present an ‘impure’ kind of artwork. I don’t need to be easily categorized or identified. It’s okay for the work to be a mix of influences and styles.”

Kahlhamer’s work fits such a scene, combining ancestral talismans, pop culture flourishes, and punk music sensibilities, all infused with creative and personal influences drawn from both a life lived and a life unknown. “It makes sense, to me, to present an ‘impure’ kind of artwork. I don’t need to be easily categorized or identified. It’s okay for the work to be a mix of influences and styles,” he says.

These days, Kahlhamer still lives and works on the Lower East Side. His studio is filled with books, taxidermy animals and katsina-inspired dolls. The dolls, 100 in number, are a nod to katsina dolls of the Hopi tribe which are thought to embody and channel spiritual power. Created over the course of three decades, making the dolls is a repetitive practice for Kahlhamer: “It’s like learning to play an instrument, there’s this constant tumbling of a figure, from one iteration to the next.”

The taxidermy, initially collected for practical reasons (Kahlhamer uses them as models in his painting), have joined the dolls to become an audience for his practice – “studio observers,” he calls them, “my army, my militia.” He says, “They’re also decoys, stand-ins; after-model ideas of the animals they used to be.” Like the katsina dolls, the taxidermy appears to be something it’s not. “It’s a sort of deception,” Kahlhamer says. “Like me, they’re tribally ambiguous – they’re connected to each other, but not.”

And like them, Kahlhamer assembles and remixes the inherited and adopted parts of his identity in the making of his own sense of belonging and affiliations. In so doing, he creates works which (true to the New York scene he calls home) are fast, chaotic, and hard to categorize.

Brad Kahlhamer: A Nation of One is on view at Minnesota Museum of American Art from June 20 – August 25, 2019.

About the artist: Brad Kahlhamer (b. 1956, Tucson, Arizona) currently lives in New York City. His work has been exhibited in recent national and international group exhibitions, including The Plains Indians: Artists of Earth and Sky (organized by the Nelson-Atkins Museum of Art, Kansas City) and One Must Know the Animals (Madison Museum of Contemporary Art). Recent solo exhibitions have been presented at Jack Shainman Gallery, New York; the Joslyn Museum, Omaha; Zidoun-Bossuyt Gallery, Luxembourg; Aldrich Contemporary Art Museum, Ridgefield, Connecticut ; and Andréhn-Schiptjenko Gallery, Stockholm, Sweden. 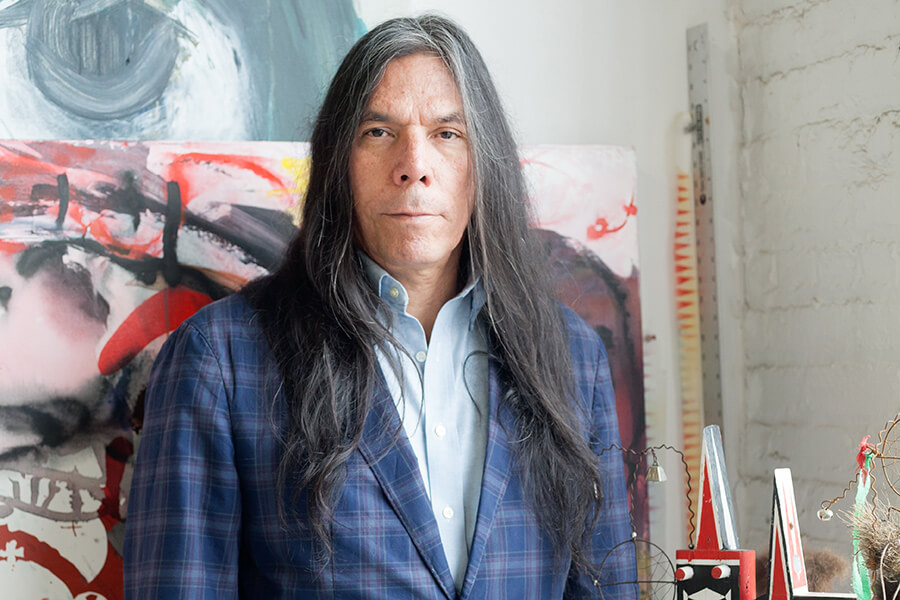