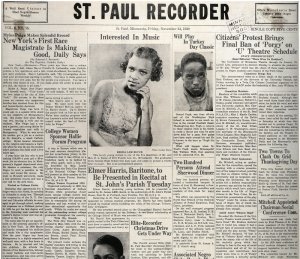 As a companion to A Choice of Weapons, Honor and Dignity: The Visions of Gordon Parks and Jamel Shabazz, the M will open Gordon Parks: A Homecoming, an installation in the Henrietta Shcmoll Rauenhorst Court. March 7 is the anniversary of Parks’s death, and the installation is a celebration of his time here in the Twin Cities. Parks began his career in St. Paul, MN in the late 1930s, working as a photojournalist for the St. Paul Recorder, the Minneapolis Spokesman (later the MN Spokesman-Recorder), and the St. Paul Pioneer Press, and as a commercial photographer for Frank Murphy’s Town and Country department store. Parks opened his first solo shows in the Twin Cities in 1940. With the help of Robin Hickman-Winfield, Gordon Parks’s great-niece, and Dawn Selle at the Hallie Q. Brown Community Center, this installation will include photographs and ephemera from Parks’s early years in the Twin Cities, on loan from community members and local archives.

Do you have a story, photograph, or memento to share about Gordon Parks’s time in the Twin Cities? Join Robin Hickman-Winfield,  Dr. Catherine Squires, and the staff at the Hallie Q. Brown Community Center on Saturday, February 1, 2020 in a gathering to build the exhibit.

This 2020 biennial revives and builds on the M’s tradition of surveying contemporary artistic practices in the state of Minnesota, in recognition of  historical, spiritual, and personal connection to the land and water. Additionally, it will acknowledge the history of displacement of indigenous peoples from this region, while highlighting the important role artists across rural and urban communities are playing in fostering conversation, awareness, and new ways of thinking about water through ecological, social, political, historical, creative, and aesthetic lenses. 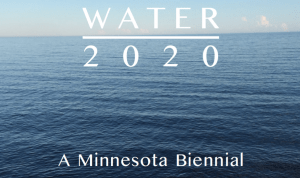