As a mid-twentieth century African American artist of Chicago, Illinois, Frederick D. Jones, Jr., is often overlooked under the large shadow of the New York Harlem Renaissance. In his painting July 7, it is clear that Jones was participating in and responding to the significant African American art tradition that was developing in Chicago. Little is known about the specifics of Jones’s life and art, but it is evident in this painting that spirituality, surrealism, and African abstraction were strong influences on his work.

The title of the work and the symbols within it, especially the date on the torn calendar page to the right, highlight July 7 as an important key to this painting. The main figure, a beautiful veiled woman, sits in a chair by an open window in a fairly rundown room. Outside her window, in front of a gleaming church façade, a man serenades her with a harmonica, possibly trying to woo her.  Between them on the windowsill sits a pink rose and three playing cards; one is the ace of hearts, another the queen of hearts, and the last is turned face down as if waiting to be revealed. These symbols seem to communicate that this painting was meant to record a significant moment in the courtship of this couple, perhaps their engagement or marriage.

In the years prior to 1958, Jones studied at Clark College in Atlanta and worked part time as a janitor for Coca-Cola. His life changed course when the company’s chairman sponsored him to study at the Art Institute of Chicago, after finding a sketchbook that Jones had left by accident in the chairman’s office.[1] The Art Institute gave Jones the guidance he needed to develop into a confident artist. Upon graduation, he became the Assistant Director of the Chicago South Side Community Center (SSCC), which cultivated the life force of the Chicago African American arts scene. Jones described the SSCC as a place where “you met people who were polished in their art and … were learning and building a type of art that was significant to the art center … and we learned it from each other.”[2]

Jones’s art reflects his friendships with artists such as Eldzier Cortor, another artist working at the SSCC whose figures share Jones’s African abstraction, and Hughie Lee-Smith, an artist Jones met in the Navy who was involved in the American Surrealist movement.[3] July 7 contains evidence of both of these styles within its composition. The figure of the woman is composed of elongated cylindrical shapes that curve dreamily from the bottom of the scene almost to the top of the frame. Jones has dressed her in a vibrant purple skirt and a white veil, and set her in front of a deep red, draping cloth that brings to mind heavenly icons of the Virgin Mary. Her head is perched atop an impossibly long neck, typical of his female figures, with a facial expression that is vacant and masklike—in keeping with what he called his “African Mark,” a term that refers to the elements of his style that suggest an African aesthetic.[4] The curving motion of her body and the fantastic color throughout the painting sweep the viewer’s gaze through the window and into the dreamy nighttime landscape. A lace curtain is strung across the window and almost magically blends into the midnight sky, creating a hazy transition from inside to outside space. Jones’s figural abstraction and spatial disorientation point to African stylistic influence and surrealist compositional constructs.

July 7 is an extremely informative painting, filled with signs and stylistic assemblages that tell a story of courtship. Carefully placed symbols work together to describe a romantic encounter cloaked with a veil of Christian spirituality and African representation, and to create art that was current and relevant to the African American community of artists in 1950s Chicago. 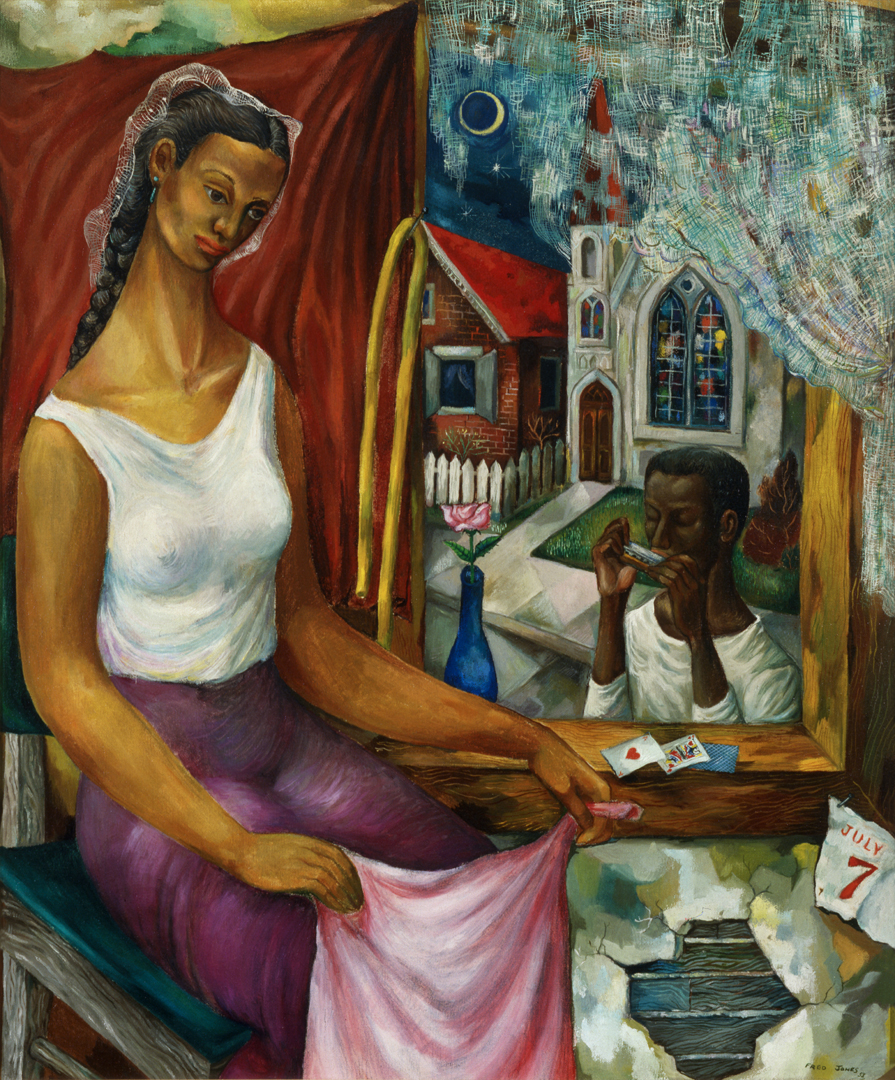