Raised in Chippewa City, Minnesota, a rural fishing village on the north shore of Lake Superior, Morrison spoke his Native language until he began boarding school. During a year-long recovery from hip surgery in his youth, Morrison took up reading, drawing, and carving, and was supported subsequently by appreciative teachers. He graduated from Grand Marais High School in 1938, the Minneapolis School of Art (now the Minneapolis College of Art and Design) in 1943, and New York’s Art Students League in 1946, after which he participated actively in the downtown art scene, where his emergent abstractions garnered positive critical attention in the New York Times and other publications. Both he and his friend, Willem de Kooning, had their first solo shows in Manhattan in 1948. Morrison had 12 one-person shows in New York between 1948 and 1960.

As a Fulbright scholar, he studied and worked in Paris and Aix-en-Provence in 1952 and 1953, producing abstract art that synthesized expressionism, cubism, and surrealism. Through the 1950s, Morrison was active as a teacher and exhibiting artist in New York and Provincetown, and his geometric and gestural abstractions were in dozens of group shows across the United States. After teaching at the Rhode Island School of Design from 1963 to 1970, Morrison taught studio art and American Indian Studies at the University of Minnesota. Despite numerous health problems, he was prolific in the 1980s and 1990s, receiving several important public commissions. In 1997 his large sculpture, Red Totem (1980), was exhibited at the White House, and in 1999 he received the first Master Artist Award in the Eiteljorg Museum’s Fellowship for Native American Fine Art.

Cumulated Landscape belongs to a series of large, impressive objects that have found a wide and welcoming audience. In the mid-1960s, while summering on the Atlantic shore at Provincetown, Morrison began making monumental collages with driftwood (“found objects”) that were unique and yet reflected his friendship with the sculptor Louise Nevelson. Gridded like Adolph Gottlieb’s “pictographs,” these award-winning sculptures were widely collected by museums, corporations, and private individuals, and Morrison extrapolated them further in numerous exhibitions of drawings, rubbings, and lithographs. The critical reception of these compelling constructions was both swift and positive. New England Landscape II (1967), which is four feet high and almost ten feet wide, took the Grand Award in 1968 at the Fourth Invitational Exhibition of Indian Arts and Crafts, sponsored by the Center for Arts of Indian America in Washington, D.C. Morrison’s success in that invitational is noteworthy, since early in his career he was rebuffed in his efforts to show his work in juried exhibitions of American Indian art because it wasn’t Indian in style, and so before the late 1970s he was rarely included in such shows. New England Landscape II was quickly acquired by the Amon Carter Museum, where it has long been a visitor favorite.

Cumulated Landscape typifies the first phase of Morrison’s collage production: weathered wood is puzzled together in a quasi-cubist fashion, geometry and an insistent linearity are softened by a few curved shapes that bespeak organic vitality, and texture/tactility emphasizes tangibility. But each collage in the series has its own personality. Unlike New England Landscape II—which is ragged, rough, and warm, with a few polychrome accents—Cumulated Landscape’s individual parts all are neatly joined together in a tight, mostly rectilinear composition and its palette is more variable: shades of brown interplay with grays, greens, blues, and whites. Stressing order and clarity, but tolerating quirky anomalies of form and design, Cumulated Landscape characterizes the series in its dynamic balance of part and whole.

The pleasing play of light and dark across the surface of Cumulated Landscape suggests chiaroscuro, reminding us that Morrison described the collages as “paintings in wood.” Although freely invented, they are, he explained, “derived from nature, based on landscape.” According to Morrison, the driftwood used in Cumulated Landscape “gives a sense of history—wood that has a connection to the earth, yet has come from the water.” Although they originated on the East Coast, he acknowledged that the collages “may have been inspired subconsciously by the rock formations of the North Shore.”[1] Thus Cumulated Landscape, a touchstone of modern art, symbolizes the whole of Morrison’s career, in which memories of specific places are internalized and realized in a visual language based on mastery of the paradigms of the international avant-garde.

Even before finishing art school Morrison had already won awards and prizes for regionalist landscapes, realistic portraits, and mysterious still lifes, and was fully engaged in the modernist enterprise.[2] His small painting, Dream of Calamity (1945), a response to the bombing of Hiroshima and Nagasaki, was au courant in terms of international style and shown in the first biennial exhibition at the Walker Art Center in 1947. By that time Morrison was making what the critic Lawrence Alloway called “biomorphic abstractions” (poetic, visual analogs for a variety of forms in nature) that extended the works of André Masson and Joan Miró. In 1947 he was included in the Whitney Museum of American Art’s Annual Exhibition of Contemporary American Painting. By 1950 he was showing delicate, cryptic, organic abstractions that belong to the surrealist phase of emergent abstract expressionism (cf. Mark Rothko’s “multiforms”). A quasi-constructivist phase of geometric abstractions of landscapes and urbanscapes in the mid-1950s was well received and collected by such institutions as the Seattle Art Museum and the Whitney. From the late 1950s through the mid-1960s, he made sophisticated abstractions that synthesized late impressionism, “action painting,” and tachism, the European counterpart of abstract expressionism. The Minnesota Museum of American Art has outstanding examples from virtually all of these phases in Morrison’s long career, including Pennsylvania Tryptich (1964), notable for its admixture of the action and color field styles of the New York school.

After he retired from teaching in 1983, Morrison worked for 17 years from his studio/home on the Grand Portage Indian Reservation, along the north shore of Lake Superior, near to the place he was born and raised. “From this vantage point he pursued, like a Zen master, the paradoxically tangible yet ineffable truth of nature in a series of paintings and collages of varying scale that seek not to picture the visible but to offer an abstract equivalent for the artist’s aesthetic response to land, water, and sky.”[3] The “Red Rock Variations” and the “Horizon Series” include masterful paintings and works on paper whose surfaces range from telluric and thickly impasted to evanescent and transitory. Many of them rely on automatic drawing and frottage and refer yet again to the biomorphic shapes of abstract surrealism. Spatially complex, diverse but unified, and sometimes pictographic, these later works are intriguing and memorable.

In its linear division of a richly wrought surface, Untitled (Lake Superior) recalls the “White Paintings” (which date from the mid-1960s to the early 1970s). But its insistent horizontality, ostensible subject matter (the sublime, febrile beauty of the superior lake), visionary expressionist palette, and thematic structure—land, water, horizon line, sky—link it to the “Red Rock Variations” and the celebrated “Horizon Series.” Morrison’s recurrent horizon line, usually a quarter of the way down from the top of the picture support, first appears in the 1940s. Like the thin strip Barnet Newman called a “zip,” Morrison’s horizon line is simultaneously a critical formal element, a symbol, and the artist’s logo. The persistence of the horizon line in his work establishes a dialogue between phenomenon and noumenon as a leitmotif of his mature aesthetic: the horizon is frequently visible from the shore, but we cannot, in fact, ever go there. It is thus a concept, not a destination. Indeed, in the same breath the artist spoke of the “wind—that phenomenon of nature we can’t even see” and the “enigma of the horizon.”[4] And yet, the scumbled layers of scintillating pigment produce a sensuous palimpsest, reinforcing the fact that the painting is a physical object, here and now.

The irregular red “cloud” that drifts, floats, and/or evolves diagonally through the strata of the painting from lower left to upper center-right links Untitled (Lake Superior) iconographically with Morrison’s images of Manido-Gree-Shi-Gance, or Spirit Little Cedar Tree. This is a white cedar that seems to defy nature by growing out of a rock perched high above the lakeshore on land owned by the Grand Portage Band of Ojibwe. At least 300 years old and sometimes called the Witch Tree, Manido-Gree-Shi-Gance is believed by many to have healing powers and is regarded as sacred by both Native and non-Native people. Indeed, Morrison and his former wife, the artist Hazel Belvo, helped raise funds to preserve and protect the tree. The significance of this miraculous tree for Morrison is reflected in the fact that he investigated/represented its image on at least eight other occasions, including his stunning acrylic painting, Witch Tree (1981), in the collection of General Mills. Morrison was interested in magic (as an indigenous medicinal practice) and the magic of nature, which would explain part of his attraction to the fierce beauty of the tree. But like the Grand Portage Ojibwe Indians, including the artist himself, Manido-Gree-Shi-Gance is a weathered but dignified survivor. Surely he understood and appreciated this aspect, as well. 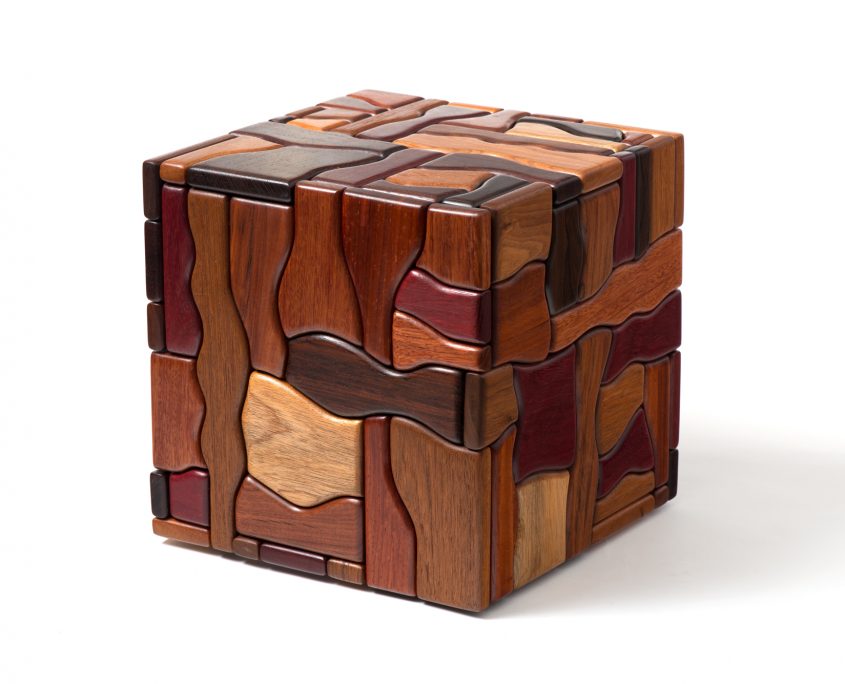