Louise Nevelson’s Untitled (Abstraction) of around 1952 is a stunning example of her early painted wood sculptures.  Made in New York City, the work uses traditional dowel joinery in its construction. The parts easily separate but are intended in one specific arrangement, which is made clear by the placement of a signature/title plaque on its attached wooden “base.” Measuring 31 x 22⅜ x 9⅞ inches, Untitled (Abstraction) is diminutive in comparison to her better-known monumental assemblages, such as Sky Cathedral Presence (1951–64) in the collection of the Walker Art Center. In 1957, Untitled (Abstraction) was traded with Nevelson’s friend and colleague, the well-known Minnesota artist George Morrison, who showed at Grand Central Moderns Gallery with Nevelson. The work entered the Minnesota Museum of American Art’s collection in 1999 when it was purchased from Morrison’s former wife, another notable Minnesota-based artist, Hazel Belvo.

Nevelson famously foraged her Manhattan neighborhood for discarded objects, such as banister and baseball bat fragments and scraps of wood, to use in her sculpture. Believing that repositioning the forgotten, overlooked, even scorned objects not only gave them new life but also revealed something about and beyond them, Nevelson carefully chose, transformed (most often through paint), and arranged them in groupings that, with her skillful hand and astute perception, cohered as sculptural objects. Untitled (Abstraction) can be viewed at once as a totemic figure and a forest that is thick, magical, and threatening. She admitted that her early childhood in a forested part of the Ukraine and her new lifestyle as an immigrant in the woods of Maine influenced her artistic materials and subjects, as well as her ambivalently charged feelings about such complex environments.[1] Nevelson’s sculptures oscillate between nature-inspired, sublime imagery and more comforting, man-made domestic forms, creating a central tension in all her work between the familiar and the utterly strange.

Nevelson’s persona—like her art—loomed large throughout her half-century career as a working artist. Over that career, she was dubbed “the grande dame of the art world,” “the queen bee of sculpture,” and “the mistress of the marvelous.”[2] In addition, her flamboyant presence—complete with double thick false eye lashes, rich flowing fabric garments, and headwear that included diaphanous scarves and a black jockey helmet—was oft-photographed by the likes of such pioneering and venerated portraitists as Lotte Jacobi, Cecil Beaton, Hans Namuth, Robert Mapplethorpe, and Arnold Newman. Nevelson believed her art was her life, in many senses of that concept. Leaving a husband and essentially abandoning a young son to devote her life to her education and work in the studio, Nevelson committed herself completely and uncompromisingly to her work. Though she would scoff at the idea of objectifying herself in order to draw attention to herself and her art, Nevelson’s careful and exuberant construction of her persona was, at the very least, akin to the way she constructed her work—part whimsy, part theater, and part deep personal angst and alienation.

When considering a work like Untitled (Abstraction), one cannot help but concur with the description of the artist as “the mistress of the marvelous.” As an apprentice to Diego Rivera in the 1930s, Nevelson would have had contact with the surrealist notion of the marvelous through the Mexican surrealist groups connected to Rivera and his wife, Frida Kahlo. Rivera was close to Parisian artist and writer André Breton, who conceived of the marvelous, in art, as the potential for literal transformation of meaning that is engendered in the very experience of seeing. In the early 1930s, Breton was energized by Salvadore Dali’s paranoic-critical paintings, which called into question what the viewer was seeing. In his famous description of the meaning created by seeing an image on a postcard placed accidentally on its side, Dali defined the marvelous as the ordinary radically and unconsciously transformed. Breton further argued that this could propel a like transformation in the viewer.[3]  Through this understanding of art’s affect, Breton argued for a revolutionary art that did no less than constantly refresh the viewer’s experience in, and knowledge of, the world.

Nevelson’s approach was indeed marvelous, in this sense. To Nevelson the works, like herself, were never completed or closed down. As she saw new aspects in the details of her completed constructions, she would cannibalize and refashion them into altogether new works. Doing this throughout her working life, Nevelson both resisted and amazed the traditional art world of static, so-called permanent objects. So, steeped in this sense of potential, all of Nevelson’s work appears to be always capable of becoming something else—something more, something utterly different, demanding to be seen and experienced anew with each encounter. From the giant environments to pedestal pieces such as Untitled (Abstraction), the experience of those willing to openly confront the work is ultimately the subject of Nevelson’s sculpture. In this way, the work is made marvelously ever-new beyond her earthly ability to refashion the material parts. 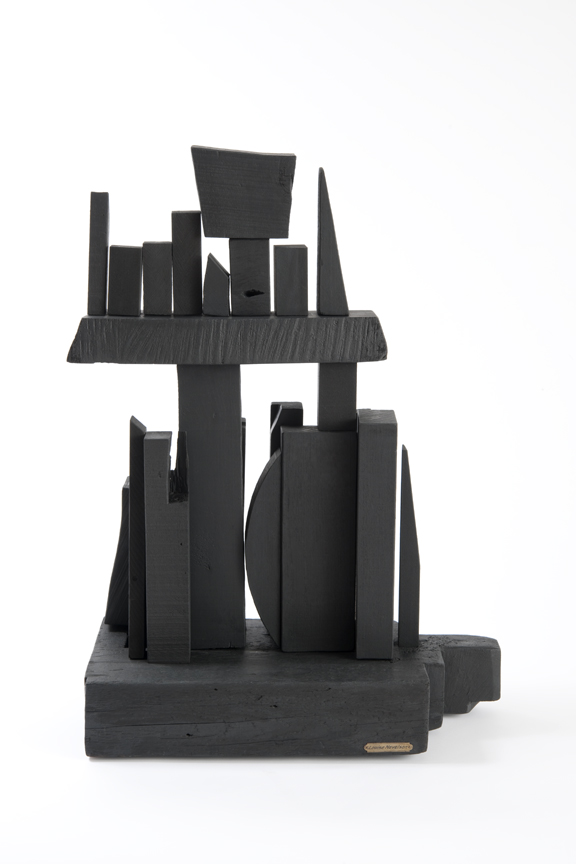