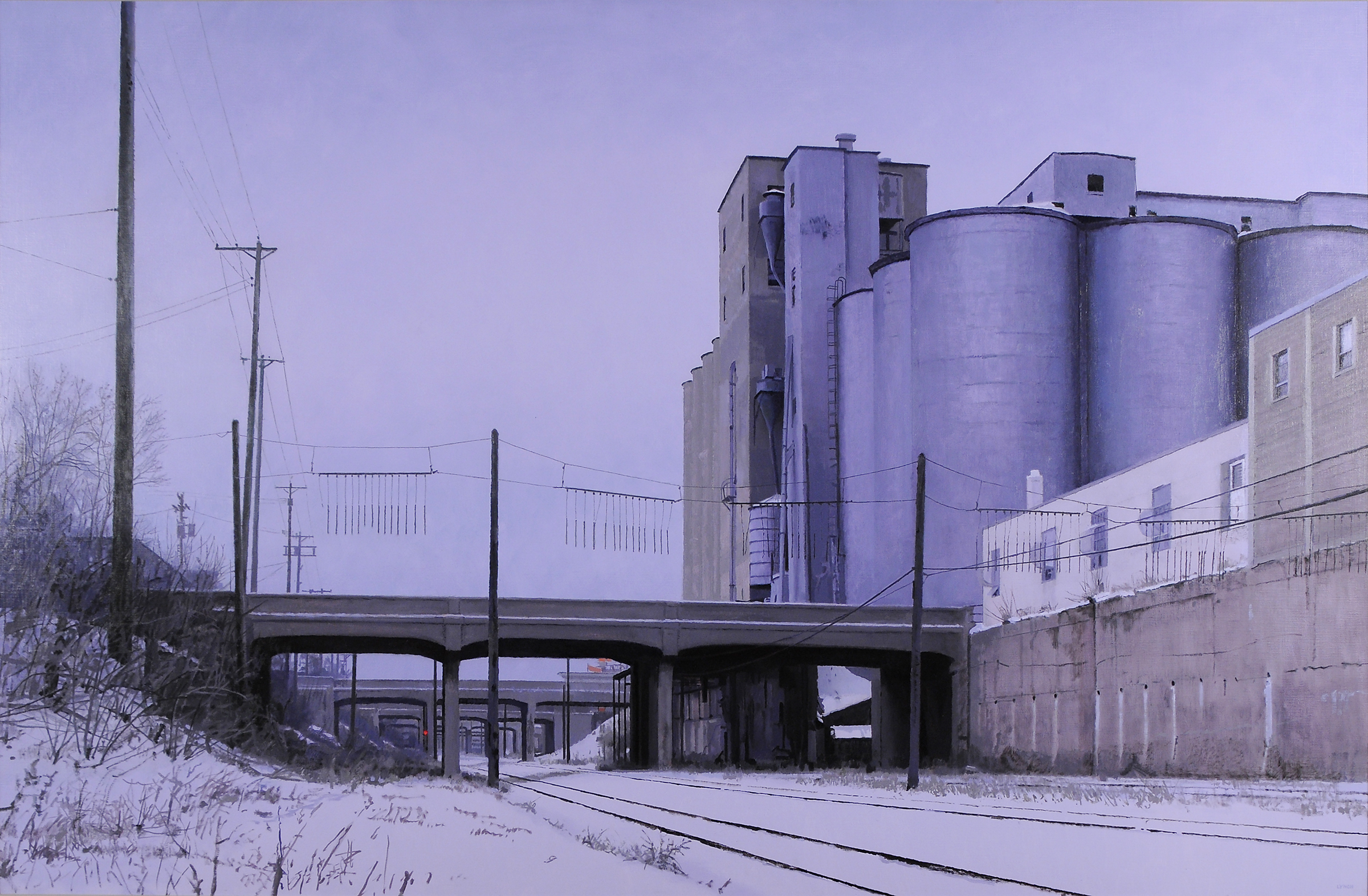 One of the most striking things about Minnesota artist Mike Lynch’s Elevator—29th and Harriet is the painting’s size compared to the rest of Lynch’s work, which often is no bigger than a standard sheet of 8.5 x 11 inch paper. At an unusual 53 x 80 inches, the striking expansiveness of the scene is emphasized, calling to mind experiences of being surrounded at once with both vast emptiness and monumental industrial buildings. This is one quality that is present throughout the majority of Lynch’s paintings both large and small, such as Marine Oil Company (1985) and Pioneer Elevator (1985). The amount of space given to the sky, rather than the actual subject, conveys a sense of large-scale isolation and loneliness while still being stunningly beautiful. The delicate purple tinted sky, its color reflecting off the snow, is something all Minnesota residents are familiar with, but this scene is somewhat mysterious. The snow is pristine and unplowed, allowing the vegetation from the previous season to peek through in the ditches. This untouched quality suggests abandonment, and a feeling somewhat akin to nostalgia, as a once productive and prosperous grain elevator stands empty and uninhabited.

These feelings are not uncommon in Lynch’s work. Most of his paintings are created at dusk or nightfall, and he often works in his car if the weather is not cooperating. According to Lynch, “things simplify at night” and the most banal scene can be rendered magical.[1] He effectively captures that sense of magic in his paintings, when it would be almost impossible to do so with photography. His urban scenes often focus on buildings that are soon to be demolished, giving them that abandoned, mysterious quality.

A thoroughly Minnesota artist, Lynch has gone so far as to incorporate the colorful ore from the Iron Range when mixing his paints. He was born in Hibbing and has resided in the state for most of his life, after brief periods in Amsterdam and San Francisco. He also received much of his education in Minnesota, studying with Birney Quick at the Grand Marais Art Colony and with Eric Austen Erickson at the Minneapolis School of Art (now the Minneapolis College of Art and Design).[2] His work is owned by museums and corporations such as the Minneapolis Institute of Arts, the Walker Art Center, and the Federal Reserve Bank of Minneapolis, as well as the Minnesota Department of Revenue, which commissioned the massive 10 x 18 foot painting of the St. Paul skyline for the lobby of its building on St. Paul’s Robert Street. A widely acclaimed artist, he was awarded McKnight Foundation fellowships in 1983, 1987, and 1996. In 2003 the McKnight Foundation named him a Distinguished Artist, and he joined the ranks of five other artists who had received the award by that time.

Rooted in American regionalism of the 1920s and 1930s, Lynch acknowledges the dilemmas he faces as a realist painter. In a journal entry dated September 20, 1994, he wrote:

“There’s a mathematics and logic to [a picture] which must be apprehended intuitively, as in how to simplify, how to represent.…There’s always a degree of failure or imperfection, i.e., the reality is always greater than the representation. What then is the picture’s value? Its value is that it brings the viewer an opportunity to see the scene divested of its physical presence; like at a movie, we participate one step removed.”[3]

“An opportunity to see the scene divested of its physical presence” is an accurate way to describe the work of an artist. Throughout Lynch’s career, audiences have been presented with landscapes that eschew the harsh illuminating aspects of daylight. Instead, the audience is given rare glimpses of overlooked areas in urban and rural parts of Minnesota. The portrayal of these places during the quiet and calm of night does exactly what Lynch writes. We see the scene not as we normally would during the day—surrounded by traffic, with the imagined ambient noises—but almost as a form of urban portraiture, stripped of all the extras, removed from its “physical presence.” Lynch presents his scenes as a portraitist would introduce his or her sitter, with flattering light and colors to render even the most homely and aged subject stunningly beautiful and pure.