Warren Mackenzie’s belief and pleasure in the simple, “honest” pot is well known. For more than fifty years, the internationally recognized potter has pursued the philosophy of the mingei (Japanese/Korean folkcraft) tradition in both his work and his daily life. With the mingei aesthetic, the beauty and understanding of traditional crafts arise from an object’s utility. In keeping with this philosophy, MacKenzie’s bowls, platters, vases, lidded jars, yunomies (cups), teapots, and pitchers are functional, comfortable, tactile, and largely unadorned objects. Since 1953, he has lived and run his pottery on an old, secluded farm in Stillwater, Minnesota, treading lightly on the land, working daily. For MacKenzie, there is nothing precious about his pots. They are simply to be held in the hand, admired, and used daily.

As understated as MacKenzie’s pots may be, an intuitive fusion of form, function, and glaze informs his work, giving it a unique aesthetic integrity. This respectful resolution of form and function also derives from another mingei precept, daily practice. If the intended purpose of MacKenzie’s pots is immediately self-evident, they also, on a more subtle level, evoke an intangible presence of the hand that tangibly links the user to the maker. This presence of the hand is literally evident in the Tenmoku and white glazed stoneware vase from 1959. Here MacKenzie lightly brushed the fingertips of one hand across the pot’s curved surface, leaving abstract organic marks that animate the vase’s form and are a visual reminder of the maker.

The tall, lidded jar and large platter, made nearly fifty years after the vase, also reveal Mackenzie’s hand. The jar’s almost chartreuse color is the result of pouring a matte brown glaze over a matte gray glaze. MacKenzie gives the simple pot more structure by cutting away the form with a potter’s tool to create a dynamic, fluted surface. The platter, glazed with one of MacKenzie’s favorite Shino glazes, fires white, grey and reddish-orange at the edges, all characteristics of the glaze. MacKenzie’s strokes of black glaze create a staccato pattern across the platter’s surface, referencing earlier Japanese ware.

MacKenzie’s history with the Minnesota Museum of American Art is long and rich, beginning in the late 1940s when the museum was known as the Saint Paul Gallery and School of Art. He and his first wife—Alix Kolesky, whom he had met at the School of the Art Institute of Chicago—moved to Saint Paul from Chicago in 1947 to teach at the school, which was located in a stately mansion that still stands at 476 Summit Avenue. While the MacKenzies taught classes, made their own work, and fired kilns in and around the main house, they resided in the mansion’s carriage house at 476½ Summit.

The first major influence on the MacKenzies was the work of the British potter Bernard Leach (1887–1979) and his acclaimed 1940 book, A Potter’s Book, which they first discovered as students in Chicago. They were impressed with Leach’s philosophy, which embraced Eastern and Western practices and celebrated the simple mingei functional pot. After moving to Saint Paul, and following much correspondence, they convinced Leach to take them on as apprentices at his renowned pottery in St. Ives, Cornwall, England. Taking a leave of absence from the school in 1949, they crossed the Atlantic Ocean by ship and did not return to Saint Paul until 1952.

Fortuitously, Warren and Alix ended up living in Leach’s home where they were surrounded by an array of pots from China, Japan, and elsewhere. Born in Hong Kong and raised in Japan, Leach had, in his youth, befriended the young Japanese potter Shoji Hamada (1894–1978), who helped him set up his St. Ives pottery in 1920. Apprenticing at this pottery 30 years later, the MacKenzies met Hamada, by then a master mingei potter, and the aesthetician Soetsu Yanagi (1889–1961), who had coined the term mingei (folk art) in 1926 to refer to common, often anonymously made, craft objects. Yanagi celebrated mingei in his book The Unknown Craftsman and went on to become the founder and first director of the Mingeikan Folk Crafts Museum in Tokyo, which opened in 1936. In July 1952, Hamada and Yanagi were in England to participate in the International Conference of Potters and Weavers, held at Dartington Hall, for which Leach was a co-organizer.  Daily contact with Hamada and Yanagi drew the MacKenzies even more deeply into the mingei philosophy—showing them that it was a way of life, not just a way of making pots—and set their future course.[1]

“I gravitated to Hamada’s philosophy and how he threw pots. It was a philosophy of ‘don’t look at my work, but look at the influences of my work,’” Warren stated in 2007. “These influences are stronger [than my pots], as they represent a culture.  Koreans didn’t have a word for ‘good’ or ‘bad,’ just ‘mu, it is.’  Hamada’s work had tremendous breadth. It was an attitude, mu, carried out as well as possible.”[2]

On a more practical level, apprenticing at St. Ives taught the MacKenzies what life as a potter meant. They learned how to run a pottery, from the ground up. Working daily, they gradually learned to throw large quantities of pots at a single sitting that were good enough to be sold under the Leach Pottery name. Eventually they would make their own pots at St. Ives, which they shipped back to the Saint Paul Gallery to be sold along with St. Ives pots. Before returning in 1952, they put out the word to Saint Paul friends to look for an old farm that they might acquire to start their own pottery. They found the Stillwater property in January 1953, moved into the farmhouse in March, and immediately began their pottery in a barn. They also opened a shop to sell their work, and later the work of other potters, which operated for just more than 50 years. In 1954 Warren began to teach ceramics at the University of Minnesota, providing them with a modicum of financial security. He retired from the university in 1990, but still works and lives on the property with his second wife, Nancy, a textile artist whom he married in 1984.

While at St. Ives, Hamada had expressed an interest in visiting the United States. Alix efficiently organized a series of four workshops at Black Mountain College in North Carolina, the Archie Bray Center outside of Helena, Montana, the Chouinard Art Institute in Los Angeles, and the Saint Paul School and Gallery that would feature Leach, Hamada, and Yanagi. In addition to the Saint Paul workshop, which took place in November 1952, Leach, Hamada, and Yanagi juried the museum’s first Fiber-Clay-Metal biennial exhibition. Concurrently, the MacKenzies organized an exhibition at the Saint Paul Gallery that featured 100 of Hamada’s pots, shipped from Japan, and another 20 by the respected Japanese mingei potter Kawai Kamjiro (1890–1966).  “All of the pots were for sale and inexpensively priced. Hamada also gave away pots as gifts to practically anyone who had done anything for him,” recalled Warren.[3] Thus, Hamada’s first solo show in America was at the Saint Paul Gallery. The three prestigious guests lodged in nearby homes on Summit Avenue and spent Thanksgiving Day at Anita and John Morgan’s home, called the Chalet, in the residential community of North Oaks in White Bear Lake, just northeast of Saint Paul.

Both Warren and Alix made pots for their Stillwater pottery, but Alix was the chief decorator. It is not known which potter threw the vase and soup bowls from 1959, but it is Alix who decorated them. Her attenuated, linear designs recall the aesthetic of such modernists as Paul Klee and Joan Miró and the work conveys the couple’s collaborative spirit. Today, 65 years later, the MacKenzies’ team practice is still regarded as the source of Minnesota’s thriving 21st century ceramic community.

At age 87, Warren MacKenzie still works daily in his studio. His legendary commitment to the functional, “honest” pot inspires ceramists, young and old, the world over. For MacKenzie, there exists not only a deep aesthetic relationship between the maker and the pot, but also a spiritual one that is passed on to whomever is willing to hold, study and use it. Ultimately, MacKenzie understands that the intangible, but powerful, quality of the hand is passed from potter to user through the pot, and thus unites the three. 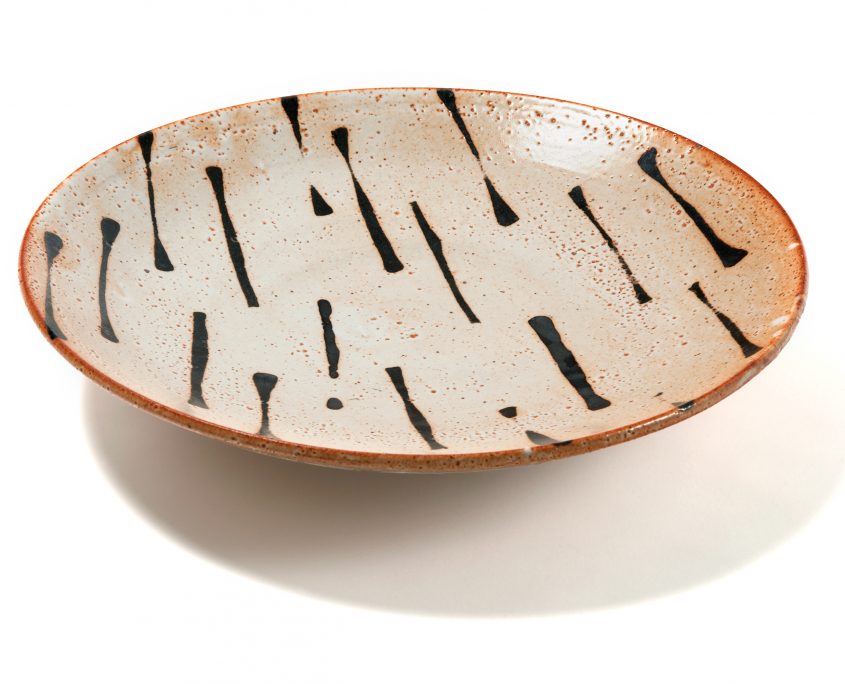