Paul Howard Manship’s aesthetic practice stood on the threshold between the past and the present. Born and raised in St. Paul, Minnesota, Manship looked to the classical past for both artistic style and subject matter while he lived and worked in an era of remarkable progress and change. For a thirty-year period beginning just after World War I, he was lauded as one of America’s premiere sculptors. This was a time of great experimentation in the arts, the rise of the automobile, and the relaxing of social mores—a time associated with the Jazz Age and chronicled in the writings of another St. Paul native, F. Scott Fitzgerald. Yet, in spite of progressive times, Manship’s elegant, small-scale figurative sculptures and large public art commissions were designed in a classical or archaic Greek style that idealized the human form. Virtually all cast in bronze, his widely collected work was admired for its technical mastery, finally crafted surfaces, and brilliant patination.[1]

Manship cultivated his taste for classicism in Rome, where he worked for three years after winning a Prix de Rome scholarship to the American Academy in 1909. He returned to New York City to live and maintain a studio in 1912, and took on Gaston Lachaise as his assistant from 1914 to 1921. Although his highly stylized work largely depicted mythological themes and graceful, noble animals, he also executed numerous war memorials throughout his career, as well as portraits of such noteworthy people as Abraham Lincoln, John D. Rockefeller, and John Barrymore. As Harry Rand asserted in his catalog essay for a 1985 Minnesota Museum of Art retrospective of Manship’s work:  “He exploited the past, mining antiquity’s treasures of formal possibilities. He successfully adapted classical and oriental antiquity, the passport of his knowledge always visible, displayed to gain the spectator’s confidence.”[2]

His career escalated from the mid-1920s to 1937, a time when he and his family maintained a home and studio in Paris. In 1934, a particularly active year, he was commissioned to design the widely recognized, monumental gilded bronze Prometheus Fountain at Rockefeller Center Plaza in New York City and the Bronx Zoo’s bronze Paul J. Rainey Memorial Gateway, with its fanciful birds and beasts.

Also during this period, Manship designed Indian Hunter and His Dog (1926), which he declared was his favorite work because it reminded him of his boyhood on Summit Avenue.[3] Perfectly scaled and fully in the round, Indian Hunter and His Dog was commissioned by fellow Saint Paul native Thomas Cochran, Jr. (1871–1936), who also lived in New York in the 1920s. It was to be the centerpiece of Cochran Park, a triangular slip of land at the intersections of Western, Portland, and Summit Avenues in St. Paul’s affluent Ramsey Hill neighborhood (fig. 1). Cochran’s mother, Emilie, had given the land to the city in 1923, in memory of her husband, Thomas Cochran, Sr., who had moved from New York City to St. Paul in 1869 and had died in 1906. The park, directly across Western Avenue from the family home, had always been a playground for children and Emilie wanted it to remain that way. Like Manship, Cochran’s sensibilities cherished the past, rather than the rambunctious, youth-oriented Jazz Age.[4]

From an initial blocky, crayon-and-pencil sketch on paper, Manship created the eloquent 1926 bronze study, both of which are part of the Minnesota Museum of American Art’s extensive Manship collection. The study was soon cast life-size at the prominent Alexis Rudier foundry in Paris, which also cast many impressionistic sculptures by the influential Parisian Auguste Rodin.

Fully expressing Manship’s signature archaic style, Indian Hunter and His Dog depicts an idealized, muscular youth running full stride, carrying arrows in his right hand and a bow in his left. The work also embodies the then popular notion of the “noble savage.”[5] Expressionless, the hunter, with his exuberant hound running at his feet, is clad only in a breechcloth and wears a single feather in his tied-back hair. Although the work symbolizes the act of hunting, it is more elegant than violent, more graceful than aggressive. Indeed, Manship’s streamlined composition all but erases any thought of killing. In pose, the youth’s decided frontality—his serene mask-like expression and the fact that he leads with his left foot—all recall the archaic Greek kouros figure. Compositionally balanced with the fountains symmetrically placed, Indian Hunter and His Dog clearly demonstrates Manship’s sophisticated understanding of classicism, a style that exploits the power of the idealized figure and restrained emotional content.

As the art world increasingly embraced abstraction, Manship’s stylized aesthetic, although officially praised, began to fall out of favor with critics in the 1930s. Nevertheless, a design-conscious, Art Deco-oriented public still coveted and collected his elegant streamlined figures with their symbolic poses, lustrous uninflected surfaces, and classical flourishes. “His predilection for monochromatic conception of form would stand him in good stead among the practitioners of Art Deco, in which surface pattern triumphed…Although this general taste grew from wide-scale preference for a machine age aesthetic, Manship’s needs and that of the general public converged. The artist was in the avant-garde of popular sensibility; he saw art performing a socializing and humanizing function.”[6]

In 1938, at age 53, Manship was commissioned to create one of his largest civic works, the monumental Time and the Fates Sundial for the 1939–40 New York World’s Fair (fig. 2).  Sited prominently on the fair’s Constitution Mall, the forty-eight foot high sculpture, with its gnomon soaring eighty feet in length, was advertised as the world’s largest sundial.[7] For the fair, Manship also created Moods of Time, a group of four sculptures representing Morning, Day, Evening, and Night that were placed near the Sundial.[8]

True to form, Manship turned to mythology for the Sundial theme. A central Tree of Life supports the gnomon and shelters three female figures representing the fates of classical mythology. Leading is Clotho, “the spinner,” who represents the future and holds a distaff from which she spins the thread of life. She is followed by Lachesis, “the disposer of lots,” or “the measurer,” who symbolizes the present. Lachesis measures the thread as it passes through her hands, assigning a destiny to each person. Last is Atropos, “the cutter,” who represents the past. Symbolizing the end of things, Atropos cuts the thread of life at death. The Tree’s higher branches over the figures of Clotho and Lachesis bear foliage, but the lower branches over the kneeling, hooded Atropos are barren.  Perched ominously in the Tree’s center fork is a raven, symbolizing death, who watches the cutting of the thread of life.[9] In a refined archaic style, Manship’s figures are virtually expressionless and their poses static, yet the compositionally complex work projects a sophisticated sense of line and formal resolution of its many elements that seduces the viewer into contemplating its theme.

For the World’s Fair, Time and the Fates was created from staff, a type of plaster, and later destroyed—as were most temporary works of art made specifically for World’s Fairs. In addition to the Minnesota Museum of American Art study, Manship created a smaller bronze version in 1939 that is now in Brookgreen Gardens’ collection of decorative figurative sculpture in South Carolina. Although not as monumental as the World’s Fair work, the gnomon of the Brookgreen Garden’s sculpture is sizable at 27 feet.

As with most art, Manship’s oeuvre has come into, out of, and back into favor. Following World War II, Manship’s popularity dissipated and critics frequently attacked him. Yet, he was fortunate to complete a healthy string of commissions until his sudden death in 1966, at age 80, in New York City. By the mid-1980s, with the decade’s renewed interest in design, Art Deco, and public sculpture, Manship’s oeuvre was reassessed.[10] His technical mastery and formal aesthetics were recognized anew and the fact that his work illuminates nineteenth century conventions more than twentieth century modernism was no longer a perceived liability. The Minnesota Museum of American Art’s 1985 traveling exhibition, Paul Manship: Changing Taste in America, shed new light on his many accomplishments and intuitive grasp of beauty, clarity, and balance in the three-dimensional form.

Ultimately, Manship believed that an artist was necessarily of his time and of “his age and its spiritual and material influences,” and thus must mediate those forces.[11] Although he looked to the nineteenth century and archaic Greek sculpture for inspiration, and was critical of modern art and the “machine age,” it is not surprising that his work was very much a part of contemporary art and that he drew from the commercial design trends of the Art Deco and streamlined 1920s and 1930s.[12] Indian Hunter and His Dog and Time and the Fates Sundial clearly express Manship’s multiple, and often conflicting, influences. The Minnesota Museum of American Art’s collection of Manship’s works is testimony to the art historical importance of Paul Manship, and to the continuing influence and impact of his oeuvre. 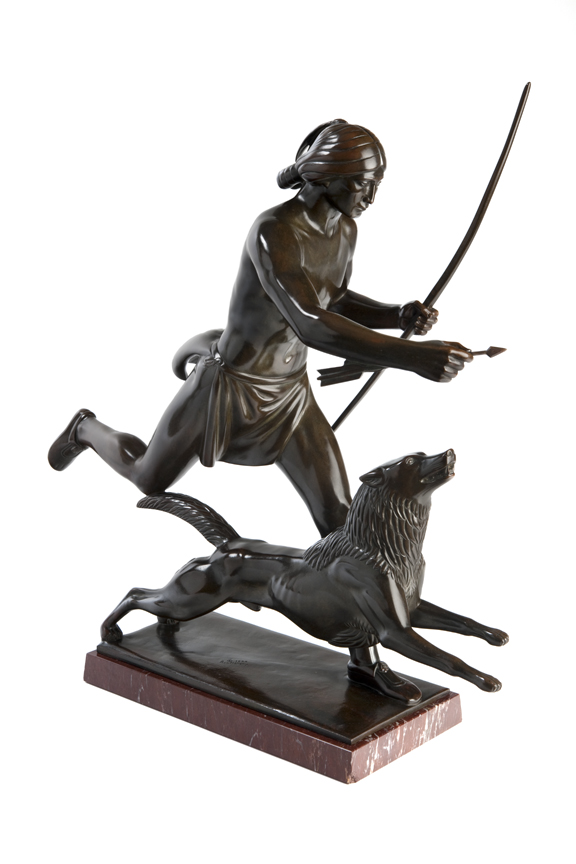 [7] The MMAA owns the ink and pencil drawing and two bronze studies of slightly different sizes.