Simon Sparrow was a street evangelist living in Madison, Wisconsin in the late 1980s, when he began to create massive mixed-media assemblages like this one. Born in West Africa and raised on a Cherokee reservation in North Carolina, he was self-taught, what some have called an “outsider artist,” because he didn’t attend art school or was influenced by mainstream art idioms. He said that his art was simply a channel for divine forces to speak through him, and claimed he often didn’t even know the exact meaning of the final artwork.

Sparrow clearly alludes to Christian iconography—the Lamb of God and the Dove, a symbol of the Holy Spirit—in the center of the frame at the bottom. Even the old football trophy suggests a Christ-like figure. But he also references West African spiritual traditions that emphasize the belief in spirit beings and magic. He was especially fond of materials that appear to glow from within—like glitter, pearls, and gold—lending the piece its own life-force. Combined with the mysterious, unexplained forms and figures emerging from the shimmering composition, the work takes on a life of its own, an intoxicating mixture of the sacred and the profane. 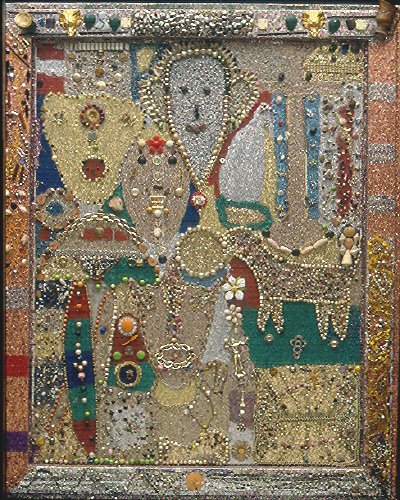 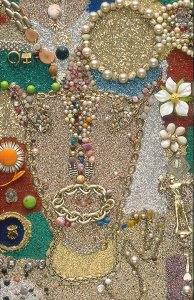