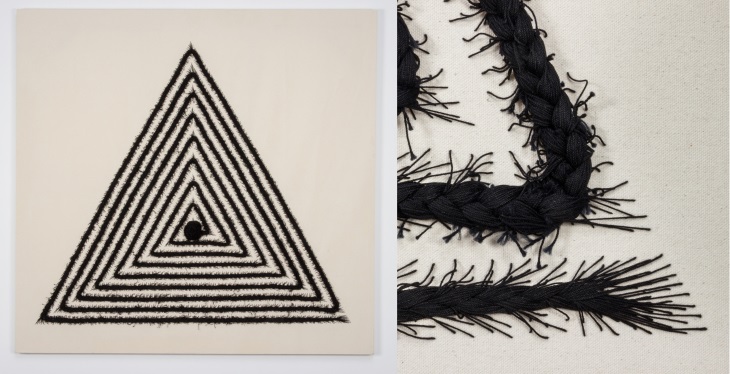 Triangle Trade is a term used to describe the slave labor and manufacturing network between Western African and Colonial America during the 16th-19th centuries since these trade routes shuttled among three different regions. Slaves were brought to Caribbean plantations who then harvested produce, like cotton and sugar, which was then shipped to Colonial America, where profits were used to produce additional manufactured goods that would be sent back to Africa to trade for more slave labor. This soft chain of cotton fibers, meant to resemble braided hair, has been meticulously stitched into and over the surface of this massive canvas. Clark gives the ephemeral quality of hair braiding a certain permanence; by weaving material and history into the canvas she repeatedly redraws the trade routes that maintained the New World slave economy for centuries. The work is an important recent acquisition for the M—for its engagement with issues of migration, slavery, and African American history—and issues of how craft and fine art coalesce. Conversations about gender, fashion, abstraction are also potent in this work.

Sonya Clark is Department Chair of Craft/Material Studies at Virginia Commonwealth University in Richmond, Virginia. She holds an MFA from Cranbrook Academy of Art, a BFA from the School of the Art Institute of Chicago, and a BA in Psychology from Amherst College. Her work has been exhibited in over 250 museums and galleries in Europe, Africa, Asia, South America, Australia, and throughout the USA, including three significant pieces that were included in the M’s 2016 exhibition Material Mythologies. She has received awards and fellowships from such prestigious institutions as Pollock-Krasner Foundation, the Rockefeller Foundation, the Camargo Foundation, and most recently as a United States Artist Fellow. She serves on the board of the American Craft Council in Minneapolis.