“Identify the act of making as a form of visual, tactile, and spatial speech,” writes artist and educator Sheila Pepe in the opening sentence of her 2014 essay for The Brooklyn Rail. In her own practice, Pepe animates this sentiment, creating web-like installations of crocheted yarn, string, shoelaces, tow lines, and rope, which speak to art history, gender, architecture, political power, and family.

Pepe was born in Morristown, New Jersey to a family of Italian-American craftspeople. Her grandfather was a cobbler, and her grandmother and mother were skilled crafters. From a young age, the craft tradition was passed on to Pepe, who was taught to crochet by her mother and grandmother. As part of a conservative Catholic household, Pepe was expected to follow the same path as her foremothers, caring for a husband, children, church, and home. However, encouraged by her father, proprietor of a family-run deli who had not had the opportunity to attend college, Pepe went on to school at Albertus Magnus College in Connecticut in the early ‘80s. She got a liberal arts degree in art history, then transferred to Massachusetts College of Art and Design to pursue further studies in ceramics.

“I learn like I eat: I want some sweet! I want some savory! And I want to say something. I’m not making a pot—I want to make sculpture.”

“I was a real clayhead,” she says in a conversation at the M, during her visit in early February. “I learned how to fire all the kilns. I even learned to make bricks.” She goes on, “But I learn like I eat. I want some sweet! I want some savory!” And more than that, she says, “I also wanted to say something. I’d just come out as a lesbian feminist, and I was so angry.” In fact, she calls herself a contrarian by nature, a “stubborn Italian.” In her work, she likewise charts her own course. “I’m interested in making the human visible in my work. And I love making things do what they’re not supposed to do.” As her practice evolved, she was interested in the conjunction of material, form, and metaphor. “I’m not making a pot; I don’t want to make utilitarian pieces. I want to make sculpture.”

She visited museums often while she was in college, looking at other artists’ work as she was beginning to find her way with her own. In particular, she has described Eva Hesse’s Hang Up and Judy Chicago’s Dinner Party as the foundation of her work. When asked to explain, she laughs, saying it’s because she hated the first and immediately loved the second. “I could see the connections between my own interests and Judy Chicago’s right away. But when I first saw Hang Up, I just didn’t get it. I mean, what’s going on? It’s just a canvas with a wire sticking out of it. I hadn’t seen anything quite like that before.” But she says she kept returning to the piece, trying to figure out what it meant. “I wanted to know the ‘why’ of it.”

In a way, she now aims to replicate her experience navigating those works for viewers of her own installations. In a sense, she’s still working to fill the gap between Eva Hesse and Judy Chicago. “I build my installations so that they have open gates,” she explains. “There’s a way through, somewhere, for everyone. And hopefully, you end up seeing something else in there, too, after that gate lets you in.” She says she aims to offer an experience of “gentle newness” in her work, introducing unfamiliar points of view and experiences in a way that’s respectful of her viewers. When you see something familiar – a certain kind of yarn, a plain black shoelace, a variety of rope – it resonates, and you find an entry point to the work’s narrative. The material vocabulary of the piece offers you a way in.

Photo of Pepe taken at the Big Draw 2007 at the World Financial Center, part of the River To River Festival, September 8, 2007, in New York City.

“I have a junk drawer-mentality,” she says. “I’m a bricoleur, a child of Duchamp.” Using materials readily at hand has a way of flattening out histories, she says. It brings more people together at the table and allows room for fresh discussions of identity and class politics. There are personal as well as popular narratives interwoven with Pepe’s materials: her use of readymade shoelaces recalls her grandfather’s craft; the crocheted yarn conjures memories of her mom and maternal grandmother. With her monumental, handmade installations, Pepe also painstakingly re-weaves narratives of modernism, contemporary art, craft, feminism, industry, and institutional power—queering the spaces her work inhabits, un-domesticating domestic materials and labor.

The making process, Pepe says, happens for her in the body first. “I think abstractly and try to translate that to the tangible world.” She goes on, “But when I’m making a piece, the decision-making happens in my hands: it’s all motor memory, hand skills. For me, there’s a connection between pure thinking and moving, getting out of my head, and being mindful in the moment. I’m drawing with the gesture first.”

Pepe is an omnivorous nonfiction reader and student of history. “I listen to lots of books, actually; I’m a slow reader otherwise.” (“Have you seen those animated history maps by Ollie Bye on YouTube?” she asks. “I love those.”) That keen sense of place, people, and time is woven throughout her installations. Her site-specific, crocheted drawings and layered webs of string and rope are rejoinders to the brick-and-mortar architectural features which surround them.

It’s not intuition that drives the “tactile, visual, spatial speech” of her work, she says. Rather, it’s a kind of “intelligence happening in the brain and body that doesn’t go through words.” Spoken or not, the language Pepe creates through thread and string has volumes to communicate.

About the artist: Sheila Pepe has received a number of awards and has exhibited widely throughout the United States and abroad in solo and group exhibitions at venues including the PS1/MoMA, the Leslie Lohman Museum of Lesbian and Gay Art in New York, and the 8th Shenzhen Sculpture Biennale. Her mid-career retrospective, Hot Mess Formalism, was organized and debuted at the Phoenix Art Museum earlier this year. That exhibition is now on view at Everson Museum of Art (Syracuse, NY) and will subsequently travel to Bemis Center for Contemporary Arts (Omaha, NE) and deCordova Sculpture Park and Museum (Lincoln, MA). Pepe will also premiere a commissioned installation, Softly…before the Supreme Court, “a crafted case in celebration of Cass Gilbert’s Endicott building,” in the Minnesota Museum of American Art’s new sculpture court when the museum opens in late 2018. 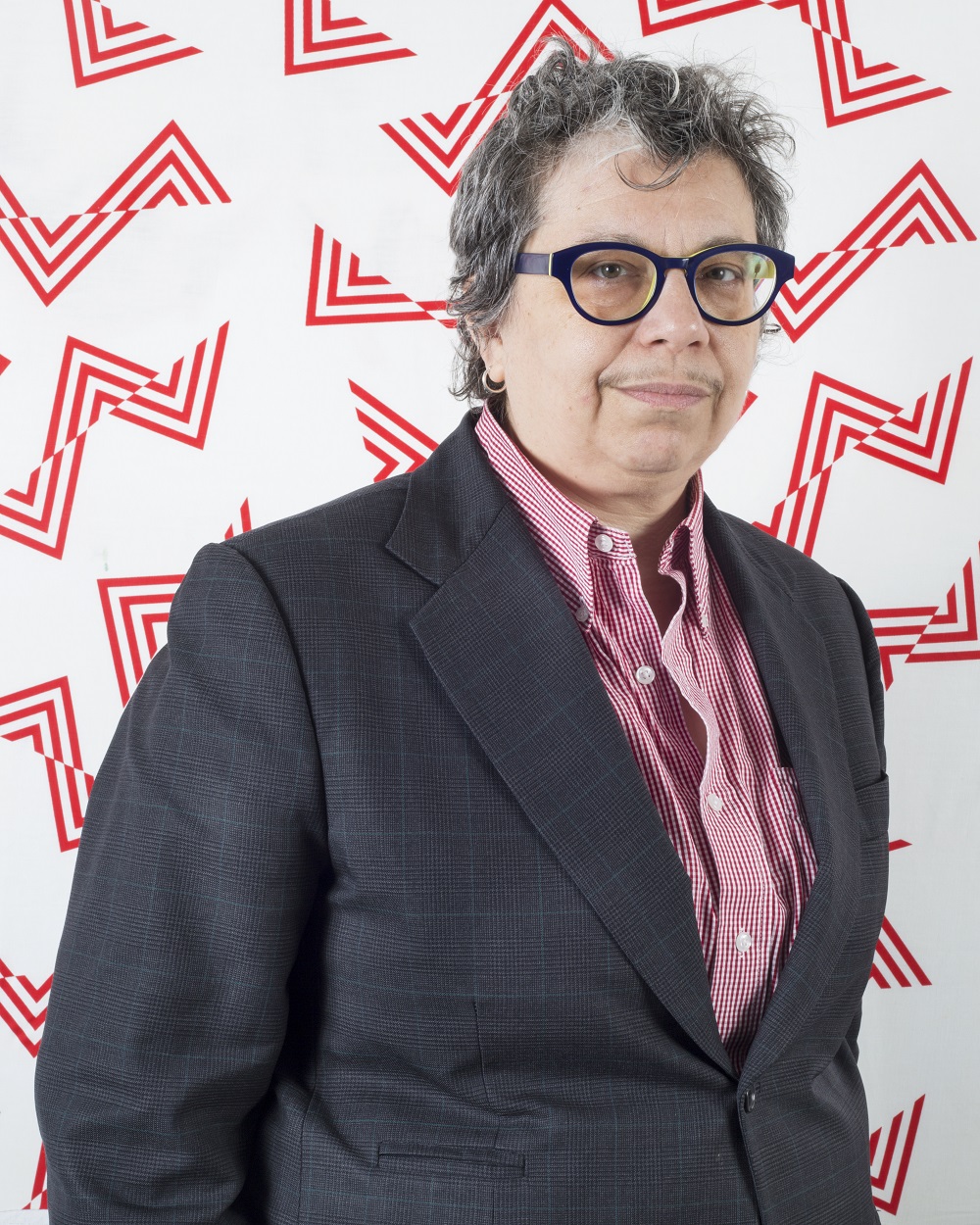